Cover can be anything that has the possibility to stop a fired bullet from hitting the intended target. Cover in RimWorld can be found in several forms. Some examples are: Rubble, Sandbags, Walls, the Saguaro cactus, and even animals.

High cover consists of any wall, constructed or otherwise, which a character can lean around to shoot enemies (if they're standing next to the wall). Any wall counts as high cover, and will stop bullets or other projectiles not just from hitting whoever is taking cover behind them, but prevent them from continuing on to hit anything else. It also blocks explosives.
Low cover consists of sandbags, rock or slag chunks, trees, bushes, animals, some types of furniture and structures, and virtually anything else that a character can shoot over. Low cover does not provide as high a chance of stopping projectiles as high cover, but it's still far better than nothing, and it allows your colonists to shoot over it whereas a wall could block your shooters' line of sight to target completely.
Natural cover is anything that can protect you on a newly generated map.
Artificial cover is anything you build; even debris that you move could potentially count as artificial cover.

Cover is multiplied by a factor of 20-100% depending which direction the attack is coming from. Cover works best against attacks coming straight at it, but doesn't work so well against incoming attacks from the sides. 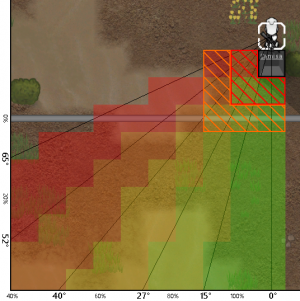 Cover effectiveness on tiles at each angle

Here's a list of each angle threshold and the corresponding cover effectiveness multiplier in a list - as this doesn't look particularly great in a table:

Cover is additionally less effective at point-blank range: cover's only 33.33% as effective when the shooter is directly in front of the target's cover, and 66.666% if the shooter is 1 tile away from the cover.

Sometimes multiple sources of cover also work together to block additional projectiles. For example, shooting at a pawn behind low cover from a diagonal angle will result in 2 units of low cover providing protection at once, each at a reduced efficiency.

Natural cover is anything that is generated when the map is created, and is almost everything you can find on a newly generated map.

Solid walls in general, from mountain walls to walls of ruins scattered across the map, are all capable of providing good cover. Pawns using walls as cover will fire from behind the corner of the wall.

Walls provide up to 75% cover, but is heavily affected by direction.

They are littered all over the map, in the form of rock or steel slag chunks. They will be used by attackers to gain an advantage over you.
You can also use chunks for protection, but their random placement is unlikely to favor you, so it's advisable to use it only during mobile warfare or as a last resort.

Chunks, in combination with a dumping area, can provide a free alternative to sandbag and barricade emplacements in the early game when cloth or solid materials are scarce. Here is how it works:

A saguaro cactus is a large tree-like cactus with 2 branches. They provide 35% cover.

A last resort to cover if you have nothing else can be animals. By having animals between your colonist(s) and the attackers, they can actually work as a makeshift barricade (or 'meat shield') by being hit instead of your colonists. Larger animals (e.g. Muffalo) work better for this. However, you shouldn't rely on this, as animals tend to wander off at random. They can, however, become enraged and attack your enemies (or you) if fired upon long enough, so there may be something to it after all.

Other pawns can be used to shield your colonist from fire if they are in between them and the attacker. This is a natural shield when going up against a brawler that is backed up by a ranged attacker as their allies will accidentally hit them. Putting one colonist in front of another will also be used as a meat shield for the one behind. A downed pawn can provide cover as long as they're still alive, but once they die they lose the ability to soak up projectiles.

Artificial cover is anything that you can build. (In a sense, rubble could be counted as artificial cover after you have moved it, and are using it as cover.)

Sandbags and barricades are the easiest and cheapest method of protection, offering substantial survivability potential while maintaining maximum angles of fire — great for shooters that need to cover a wide area of approach. U-shapes are good for one character to hide in. Zigzag patterns will allow multiple characters to cover close together, which is handy if you want to focus fire on a few attackers. They can also be combined with walls to provide additional cover from more angles.

Sandbags and barricades both provide 55% cover. Barricades differ from Sandbags in that they are made from solid materials such as stone, wood and metals, while sandbags use textiles. This allows barricades to be made slightly earlier in game as textiles can sometimes be difficult to find early on, however wood and steel are flammable and not particularly strong. Once stonecutting comes online however, stone barricades are cost effective and fireproof low cover

Walls can be used as cover as well. Characters will lean around them to shoot. Natural walls work in the same way, and will almost always have more durability than any artificial wall.

A door can be used as a high cover if it stands alone so a colonist can lean around it.

Most things that you can build can also stop bullets, although they take damage and will eventually be destroyed, catch fire or explode, if not repaired in time.

The following things do not provide cover.

The following expandable table lists all objects that provide cover, sorted by cover effectiveness, then name.