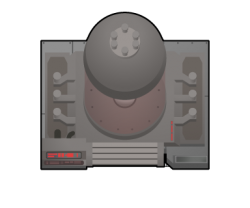 A tank of mechanite-rich fluid with support tubes for feeding in materials and nutrients. Mechanitors can use it to produce new mechanoids or to resurrect dead mechanoids. This tier of mech gestator is capable of generating medium, heavy, and ultraheavy mechs.
The process uses harsh chemicals which are stored in toxic wastepacks. Haulers must remove the wastepacks from time to time.

Large mech gestator can be constructed once the Standard mechtech research project, which requires studying a Signal chip gained from Diabolus, has been completed. They require

The large mech gestator is used to build and revive all medium, heavy, and ultraheavy mechanoids. It cannot gestate light mechanoids. Consumes 500 W of power when gestating a mech, and 50 W otherwise. If power is lost during gestation, the cycle will pause, but no other adverse effects will occur. The gestator can only be worked by a mechanitor, and that mechanitor that works the gestator will be bonded to the mechs created.

Resurrection bills are split into the classes and can only be used on dead friendly mechanoids.

Functions identically to the mech gestator, outside of which mechanoids it can gestate, its size, and its power consumption. Mechanoids which take more than one gestation cycle will need to have the mechanitor initiate each cycle, which is Smithing work.

Most large mechanoids are dedicated for combat. Only tunnelers are able to do tasks, and even then, it can hold a fair fight. If your doesn't plan on using the heavier combat mechanoids, then the uses of the large mech gestator are limited.