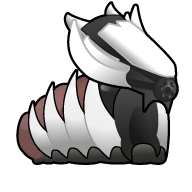 An ultra-heavy mech with a built-in mech gestator. Fed with appropriate resources, the war queen can form small war urchin combat mechs within its massive carapace and deploy them into combat. Even more than other mechanoids, the war queen resembles a giant, living insect. All war mechs can be terrifying, but humans tend to find the war queen disturbing on a deeper level.

A war queen is a mechanoid added by the Biotech DLC.

As mechanoids, every war queen is immune to fire, Flame and Heat damage, toxic buildup, and temperature extremes, despite having Comfortable Temperatures defined. They do not need to eat, rest, and have no mood. They will be stunned by EMP attacks for a time proportional to the EMP damage inflicted and will "adapt" and rendered immune to further EMP strikes for 2,200 ticks (36.67 secs). War queens have a 70% EMP resistance, meaning they are stunned for 70% less time.

You can summon a hostile War queen with a mechanitor and a mechband antenna, which requires the Basic Mechtech research. Summoning the war queen destroys the antenna, which costs

4 Component to make. However, they are not exclusive to summoning, as strong enough mechanoid raids may feature one or even multiple.

When summoned, it will be accompanied by other mechanoids. The amount of other mechanoids depends on how many times you have summoned a War queen before, but is independent of wealth, time, or colony progress. They will crash down in a ship after a random amount of time ranging from a few in game hours to days. They will not attack immediately, but will instead act like a raid and "prepare" before launching their assault.

Defeating a hostile War queen rewards the player with a Powerfocus chip. Studying one is required to research High Mechtech, and they can also be used to create various mechanitor gear.

Like the other mechanoid bosses, after being summoned 8 times, the next summon will be the same as wave 3.

The War queen is an ultra-heavy mechanoid. It requires

1 High subcore and takes up 5 bandwidth from a mechanitor. It recharges at a large mech recharger and creates 25 wastepacks whenever the recharger's waste meter fills.

War queens can generate up to 3 war urchins on command. This costs 25 steel per urchin and the action has a 15 second cooldown.

Despite their description in a Biotech preview, rushing the war queen is generally not the best strategy. The war queen will only begin to deploy urchins when she is within range of an enemy, so it can be advantageous to let her come to you. Furthermore, the war queen can only build a finite number of urchins, so it is quite viable to hunker down and win a battle of attrition. Aiming for the queen can help, but you'll need to use EMP and rush it down very quickly, lest the swarm takes you out.

The real threat isn't so much the war queen as the escorts she spawns with. The first summon comes with 5(!!) pikemen, and later fights only get harder. Pikemen in particular can snipe from a long range, making it extra difficult to interrupt the constant flow of war urchins. You might want to construct a close quarter combat arena in order to counter this.