Heavy combat mechanoids that glide on dozens of tiny legs. Their thick carapace and firepower makes them very effective against bunched-up static defenders. They are somewhat vulnerable to mobile hit-and-run tactics.

Centipede gunners are a variant of centipede that wield a minigun.

As mechanoids, centipedes are immune to fire, toxicity, and temperature extremes, despite having a Comfortable Temperature. They do not need to eat, rest, and have no mood. They will be stunned by EMP attacks and will "adapt" for 2,200 ticks (36.67 secs), starting from the stun, rendering them immune to further EMP strikes. Centipedes have a Psychic Sensitivity of 75%, reducing the effect of some psycasts.

Centipede gunners are always equipped with a minigun. They are also able to engage in (less effective) melee combat with colonists.

1 High subcore and 4 bandwidth from a mechanitor. They take 1800 ticks to initally craft, and then it must gestate for 6 cycles. Mechanoids can be fully repaired at the cost of power and nothing else. A dead centipede can be resurected for 100 steel and 1 gestation cycle so long as the corpse is extant.

Mechs under player control require power: centipedes use 10% of their power per day while active. If set to dormant self-charging, they instead recharge for +1% power / day, without pollution. They recharge in a large mech recharger (constant 400W), for 50% power/day, creating 20 wastepacks whenever the recharger's waste is filled up. 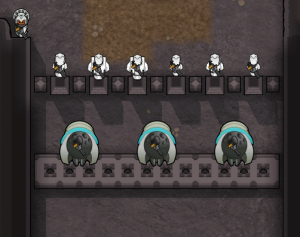 In general, centipedes are the tanks of the mechanitor's arsenal - slow, but incredibly bulky. This is due to 2 key factors:

And like all mechanoids, centipedes are disposable - able to be repaired and resurrected for a rather cheap cost. A centipede placed in the front of your line can take a doomsday rocket launcher that would otherwise kill or dismember multiple colonists, and come out largely intact. While war queens may be better in the tank role, centipedes have "regular" armament. See the Comparisons section for more detail.

Centipede gunners are effectively an incredibly durable pawn with a minigun. They can be used alongside regular pawns if you were already using miniguns in the first place. Miniguns are great in a dedicated kill area, mowing down a crowd of raiders without worry for accuracy. In those cases, gunners add more firepower at little worry. The only disadvantage is that mechanoids can't wield higher quality weapons. If you find value in miniguns, you'll find value with a centipede gunner.

In terms of raw firepower, centipede gunners are superior to lancers and tesserons per bandwidth, as well as support-class mechs like pikemen and centurions. A centipede is weaker against single targets than 4 militors, but militors have a tiny 12-tile range. And miniguns become incredibly powerful when firing at a crowd, as missed shots can hit other nearby enemies.

In return, the minigun is unwieldy. With a long firing cycle, it is less flexible. A gunner will have to aim and cooldown for the same time no matter how quick any 1 target dies. And because centipedes are slow, they aren't as great for repelling breachers and the like. Centipedes are also poor at DPS / material cost (against single targets) when bandwidth can be ignored.

For comparisons between other centipede variants, see the section below.

Comparisons - as an ally

Compared to other centipedes

100 plasteel less and are unlocked at High mechtech rather than Ultra mechtech. The minigun has ×66.6% the damage per shot, but has a firing cycle ×154.7% faster, and fires 1 more shot per cycle. The heavy charge blaster has a shorter warmup than the minigun, but a much longer cooldown. In addition, the blaster is slightly more accurate and has +7% AP, but 4 tiles less range.

This results in the gunner having more sustained DPS than the blaster, while the blaster has a faster time to kill. In many killbox setups, time to kill can be very important. If all your colonists, armed with charge rifles, are generally killing raiders within the charge rifle's 60 ticks (1 sec) warmup time, then either centipede should only shoot if an enemy gets lucky and survives all your colonist's attacks. In this case, centipede blasters will be the preferred option, due to the lowered warm up and higher per-shot damage. In contrast, the gunner's higher average DPS is preferred if mechs are constantly firing, such as in the aforementioned minigun kill setups. For the same reasons, gunners are better when fighting outside of a killbox, like when against sappers and breachers.

War queens are more durable than any centipede, both in health and health per bandwidth. Centipedes have 77% the health and very slightly less armor (−3% Sharp / Blunt armor rating) than the war queen. This bulk is further bolstered by its war urchins, which can act as valuable distractions. If a doomsday rocket launcher is aimed at a war urchin, then little is lost. Centipedes are cheaper, require less research, and take 1 less bandwidth. They also come with (more) standard armament - which can be useful for its firepower. A possible niche is to use 1 war queen as a distraction, then have a squad of centipedes, with dual purpose of damage dealers and secondary tanks.

The diabolus has a radically different niche to the centipedes. Its hellsphere cannon can blow up your killbox, but can be an equally devasting weapon against your enemies. A diabolus is only slightly bulkier than a centipede. Therefore, you should build diaboli if its cannon is desired, or centipedes if the cannon is not desired.