A compacted package of toxic waste that will slowly dissolve if not frozen. The surface is heat-sealed for safe transport. Wastepacks will pollute the surrounding terrain if they dissolve, deteriorate, or are otherwise destroyed. Toxic wastepacks are flammable. If burned or damaged, they will release tox gas.

Toxic wastepacks are waste products created by mech-related buildings or the cleanup of polluted tiles.

Pollution pumps and pawns manually cleaning pollution on the ground will generate wastepacks, at a rate of 1 wastepack per 6 polluted tiles. Wastepacks may also be dropped into your colony as part of a quest.

Up to 5 toxic wastepacks can fit into 1 tile, and they do not fit on shelves.

When a wastepack is destroyed in any fashion, they will pollute 6 ground tiles of a colony, per wastepack. A full stack of 5 wastepacks pollutes 30 tiles. When burned or damaged, they release tox gas, in addition to the pollution.[Detail Needed] (What about natural walls / walls? Do they polute underneath?).

When dropped in a caravan or unmanned transport pod, they will lower goodwill of a nearby faction by some amount. In addition, factions may drop wastepacks back at you,and hostile factions can start a raid.[Mechanics unclear] Waste dropped this way immediately pollutes the world tile they're dropped on by 0.05% - it takes 2000 wastepacks to fill a hex. Dropping them on a water hex applies an 8x multiplier, meaning 250 wastepacks will fill it.

1 wastepack per stack will disolve every 8 days, with the following factors:

Most means of destroying wastepacks have some sort of consequence: 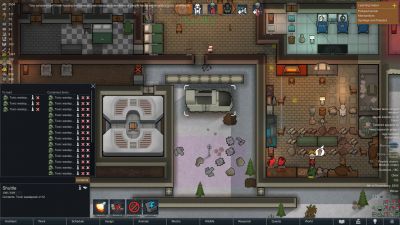