From RimWorld Wiki
Jump to navigation Jump to search
For the meal the dispenser dispenses, see Nutrient paste meal. 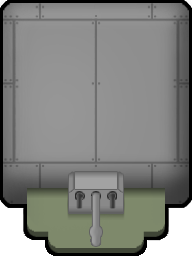 A machine that synthesizes edible nutrient paste from organic feedstocks placed in adjacent hoppers. It consumes less ingredients and time than any other meal production method - but nobody likes eating nutrient paste. Accepts raw food, but not rough plant matter like hay.

The nutrient paste dispenser is an electrical device that converts raw food placed in an adjacent hopper into nutrient paste meals; the machine accepts all food except hay. The meals are produced on demand, when a colonist or prisoner uses the machine. No work bills or tasks can be performed at the machine, and no skills are necessary to use it. Animals cannot use the machine, but will eat the produced meals if they are fed to them by other means.

It can be constructed with

The paste dispenser will be used automatically if it is accessible, has at least 10 food in the hopper(s), and is powered up. At least one hopper needs to be attached to the dispenser, and the hopper(s) must be filled with sufficient raw food (10) to produce at least one meal. All food except hay is usable by the machine, but only raw food can actually be delivered to the hoppers directly.

Hoppers act like stockpile zones, and are configured in the same way. Colonists will deliver food to the hopper as a hauling task, just like supplying storage zones with items. To ensure that your hoppers are full, make sure their settings for Priority are higher than other food storage zones.

Since a single hopper can only hold one type of food at a time, it is strongly recommended to have multiple hoppers, and at least 2, to provide the "minimum 10" foodstuff for a meal. The NPD has no problem pulling different foods from different hoppers to make a single meal, and will automatically pull first from whichever food is closest to spoiling, eliminating that management headache. This also means that, with a hungry population, even a full stack of 75 meat in an unrefrigerated hopper will probably be consumed before it spoils, and will certainly be consumed before longer-lasting vegetable foodstuffs.

Pawns will always prefer a more tasty food, so unless their Food Restriction is specifically assigned to "Paste" (located at the top of a colonist's Health tab), they will only use the dispenser if no better option is available. If assigned to that work task, Colonists will access the dispenser in order to produce food to be fed to prisoners or patients (if no better food is available).

It is possible to manually manipulate a pawn into producing as many meals as there are sufficient ingredients for, for storage or later consumption (see below).

It is also possible to force food on top of a hopper by taking it to a pawn's inventory and then manually dropping it in front of the hopper (the hopper needs to be directly south of the pawn). This allows for reprocessing meals (removing any ingredient penalties), as well as producing meals out of kibble (which will not carry the usual kibble penalty). This can safely be considered an exploit of game mechanics, as it is probably not intended for the dispenser to even process these types of food at all.

Hoppers can be placed anywhere along all 4 sides except the interaction spot (front center), so a maximum of 13 hoppers could be attached, or less if walls connect orthogonally to the NPD. When planning the placement of your NPD, include room for your desired number of hoppers and some access to them so they can be easily loaded.

The paste dispenser acts like a wall that will separate rooms. Usually one will put either one side or the back inside a refrigerated zone, so the raw ingredients will not spoil. The 3x4 dimensions of the device easily allow for a connected dividing wall to allow for refrigerated and non-refrigerated hoppers on the same machine.

If you want to feed nutrient paste to prisoners but wish to avoid building a dedicated paste dispenser for the prison room, your colonist(s) with "Warden" selected in the Work menu will retrieve a (single) nutrient paste meal from the colonists' dispenser and deliver it to a hungry prisoner, repeating as often as necessary. The manual production exploit (described below) can also be used to pre-produce paste meals for a stockpile, either nearby or within the prison cells or barracks.

If colonists have bedrooms and a dining room with decent Beauty and Comfort scores, then that can be enough to offset the nutrient paste debuff in most cases, although that will require colonists with good Art and Construction ratings, in order to produce quality sculptures and furniture. For colonists with unusually high break thresholds, this strategy can also still present a minor risk, due to stress from raids and injuries, and occasional psychic drones and other incidental stacking debuffs. Colonists with the Ascetic, Optimist, Steadfast, or Tough traits are a better match for nutrient paste, since they either have constant mood buffs of their own to mitigate the -4, or they have lower break thresholds which allow them to cope with lower mood scores overall.

In addition to the mood debuff, the game sets nutrient paste at the lowest possible food selection priority for colonists. This means that manual creation of a nutrient paste only food policy is necessary, and if nutrient paste is their only option, colonists will also allow their food bar to become almost completely empty before automatically going to the dispenser. It also makes the carrying of survival meals to prevent remote starvation much more difficult, since colonists will eat their carried survival meals in preference to using the dispenser, even while they are at home.

Despite the above disadvantages, nutrient paste has four very powerful advantages, which are enough to make it still worthwhile.

The paste dispenser also makes it a lot easier to keep animals that need to be fed by the colonists (such as dogs and grazing animals off the growing season). Feeding animals with paste requires some occasional micro-management to create meal reserves, since animals cannot trigger the dispenser themselves.

Using the paste dispenser is an automatic task that cannot be explicitely triggered. It is still possible to make a pawn produce as many meals as you want, until the machine runs out of raw food to process.