Divides rooms. Simple doors must be manually opened, which slows people down. The amount of slowdown depends on what the door is made of.

Doors provide entry points through walls for colonists while still keeping out enemies and wild animals.

Doors mostly act like walls. Doors are valid structures for supporting roofs and creating rooms. Opening a door will allow access and make heat transfer faster. Note that the room is still considered enclosed for temperature mechanics. So, unlike a hole in the wall, an open door will not equalize temperature instantly with the outdoors. Doors do not block the interaction spots of buildings.

Opening a door take a small amount of time, dependent on the material. Doors can be opened by colonists, slaves,

Doors can also be forbidden, again by selecting the door. Colonists and other colony-controlled pawns will not pass through it, even if open. However, colonists under a mental break will ignore restrictions, as do visitors, traders, and enemies.

In general, humanoid and mechanoid raiders treat a closed door like a wall. Most raiders will only try and break one if there are no other paths to their target. Sappers and breachers can break doors intentionally. Doors have less HP than walls, so tend to be prioritized. Retreating enemies will often break down doors in their path out, even if they have higher HP than the surrounding walls. The exact mechanics behind this are unknown. Manhunter animals will only try and break doors if they see something go inside it. Prisoners who have gone berserk will try and break out, while those in a prison break "have broken the locks" and can just open them.

Unclaimed doors, like those in ruins, can be opened by any non-animal until they are claimed. Doors owned by an enemy must be claimed (which requires defeating said enemy) in order for colonists to open them. 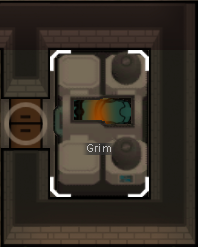 Wood is plentiful in most biomes, easy to construct, and quick to open, so a newer colony will typically make all of their doors out of it. However, it is both flammable and not especially durable, so are prone to destruction. Later on, wood is still useful for internal structures, where their health doesn't really matter.

Steel doors are moderately expensive. They are still vulnerable to fire, but have more health and open reasonably quickly. Once you can afford them, they are a decent upgrade to wood. Uranium and then plasteel have even more health, but are expensive materials, so should be reserved for prisons and active combat zones.

Stone doors open very slowly. However, they are cheap, durable and have 0% flammability. Use stone doors in places where colonists won't travel a lot, such as a burning room, battery compartment, or a geothermal generator room. Granite is the hardiest rock, and no slower than any other stone.

Once autodoors have been researched, and you have the power and component supplies to reliably operate them, standard doors can be replaced with alternative materials and not slow down traffic at all, or at least slow it far less.

When creating temperature controlled spaces, such as freezers, two doors can be used to create an 'airlock' to improve insulation and reduce temperature equalization, similar to double thick walls. The two doors should be placed in the path of travel, not side by side, and ideally a single tile space is placed between the doors. If they are placed directly adjacent to each other both doors will be open at the same time as a pawn walks through them, allowing more heat to get out, though it will still perform better than a single door on average.

On the other hand, open doors can increase temperature equalization, either with another room or the outdoors. Equalization through open doors is less potent than vents.[Verify]

Because doors do not block the interaction spots of buildings, it's possible to build "mini-rooms" that are only large enough for the building itself, with the door at the interaction spot. Mini-rooms are best used for buildings that don't damage pawn mood when used in cramped quarters, such as cryptosleep caskets and biosculpter pods

, or buildings that see only very brief use, such as a comms console.

These rooms are especially useful for biosculpter pods: mini-rooms only require 6 tiles of sterile tile per pod for maximum cleanliness. Note that while the door's tile does not need to be sterile tile itself, it does need to be kept free of dirt for the best bonus to apply. The door can be held open to maximize speed of access for nutritional loading or emergency medic cycles while still maintaining the cleanliness bonus

Assuming Normal quality, for the effect of other qualities, see Quality.