RimWorld's combat system may seem a little daunting to new players at first, however a few simple guidelines will have you ready to repel attacks and hold ground like a pro.

In every gunfight there is one very important lifesaving rule to remember:
Always use whatever cover is available!

Draft pawns to have them enter combat. While drafted, pawns with a ranged weapon will automatically fire at enemies they see. Walls and other impassible objects will block line of fire. When adjacent to an enemy, pawns will always fight in melee - even if they are holding a gun. You can assign specific targets for both melee and ranged attackers.

There are several other key mechanics in the combat system of the game:

Using the strongest cover available is key to winning a firefight. Pawns will automatically use cover, like sandbags and stone chunks, that they are adjacent to. If you have the time and resources to spare, you can make multi-layer defenses, with rows of cover you can fall back to if you're being overwhelmed. The drawback is that, if enemies advance, they can use your defensive lines as cover.

Walls are the best possible cover, shielding colonists from 75% of bullets. While they cannot be fired through, pawns will "lean" out from a wall and fire from its side. A row of 1-tile wide walls, interspersed with barricades or sandbags, are the strongest formation of cover.

Cover can also be used by your enemies. Chunks of stone and steel slag are much more effective than trees, and should be cleared out. Conversely, if assaulting a siege or mech cluster

, you should use any preexisting cover, such as chunks, ruins, or mountains.

Sometimes you will have to use more clever tactics to defeat your incoming enemies, such as when you're outnumbered, or you don't have suitable ways to cope with the incoming raiders.

During battle, it's often handy to keep colonists with firefighting duties nearby in case a fire breaks out. Pawns lit on fire will run around wildly, unable to attack. Firefoam pop packs will extinguish colonists while preventing future fires. Even if someone is incapable of violence, they can help end fires nearby and rescue people in need.

After battle, you'll likely need to clean up and repair any damage done to your base. Undraft colonists so that they can start on work. Build graves, set up a dumping stockpile accepting corpses, or use an electric crematorium to dispose of bodies, in order to avoid the mood penalty for seeing corpses.

The most important combat tip is saved for last. Use the pause feature! The tide of battle changes very quickly with a smoking turret or thrown grenade in the middle of your colonists. Take advantage of the space bar to freeze the action and give your colonists new orders.

Ultimately, colonists are beings with mood, needs, and injuries to take care of. A tired, hungry colonist will become progressively more upset, while pain isn't a particularly pleasant experience. Mental breaks are absolutely lethal in combat, as the pawn will refuse to shoot or follow orders. To prevent this, you should ideally care for colonists before combat starts.

As pawns can only hold one weapon at a time, colonists that are great at one combat stat (Shooting or Melee) are better than one decent at both. Shooting skill has a greater impact the further away a colonist is shooting from, so assign longer range weapons to skilled colonists. Give your best melee fighters the best melee weapons.

Ideally, you should keep your best doctors away from direct combat. In practice, having an extra shooter is more valuable - just don't be overly risky with them.

Tending to wounded colonists is important to from them from dying. Drafted colonists can immediately tend to others on the field, with or without medicine. Prioritize those who are bleeding out the most. While medicine does not staunch the flow of bleeding of a specific wound any faster, it can stop multiple wounds at the same time.

If a colonist starts to sustain too many injuries, you can use your less combat-skilled colonists to take over while they retreat. If need be, have your injured colonist drop their weapon and undraft them, then have your reserves pick up the weapon and fight in their place. If a pawn takes on too much damage, they may become downed and require rescue.

Ranged combat involves the use of weapons from a distance. Pawns wielding ranged weapons will shoot at enemies, because what else did you expect them to do?

Note that RimWorld does not have any ammo mechanics, even for items that visually appear to be finite, like pila and grenades. Doomsday rocket launchers and triple rocket launchers are consumed on use, while every other held weapon is infinite. Weapons will not be damaged so long as they are wielded, and weapon damage has no impact on their combat effectiveness.

Ranged weapons consist of many attributes:

There are two summary stats of how a weapon will actually perform:

DPS is a measure of how fast a weapon can deal out pain. Pain shock is the primary way of disabling pawns in combat; hurt them enough, and they will be downed. Note that enemies downed from pain have a chance to die, anyways. Other factors like range, stopping power, and aiming/cooldown time can all impact how you use a weapon in battle, but damage is a stat to be prioritized first.

If a ranged weapon is calculated to hit, it will hit, regardless of where the bullet visually lands or any defender movement. If the bullet misses, then it can impact other tiles.

Whenever a regular ranged weapon misses, the projectile will land within a random distance from the original target depending on the actual accuracy of the shot based on the weapon and the shooter. Stray shots have a 50% chance of hitting nothing, and a 50% chance of hitting another target on the alternative cell it happens to land on. Projectiles can also hit other things that are between the target and the shooter, such as stray animals. Accuracy to maximum miss distances are as follows:

There are special mechanics in regards to friendly fire, or hitting a pawn from the same faction.

Many weapons (mostly explosives) have a Forced Miss Radius stat. Forced miss is modified with with distance:

Weapons with this stat will always land within their forced miss radius, ignoring every factor to accuracy. There is a small chance to use standard accuracy instead, more likely with a small radius. 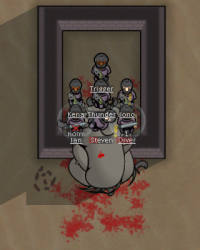 A very basic melee block, available in any doorway.

Melee involves hand-to-hand combat, with or without the use of weapons. Accuracy is determined with the Melee Hit Chance stat.

Pawns will usually not stack into a cell with other melee attackers. For enemies, only one pawn per cell can attack the same target. Undrafted colony brawllers will not always have collision, so it is possible for them to stack if the threat response setting is set to attack.

Melee combat has strengths and weaknesses. While a pawn can bash with a gun barrel in melee, a fighter with a dedicated melee weapon remains much more effective. However, a brawler may get shot down during their approach. The shield belt was designed to solve that problem. A colony might develop a small strike team of brawlers that can swiftly eliminate threats in close quarters, especially those that have infiltrated the colony. 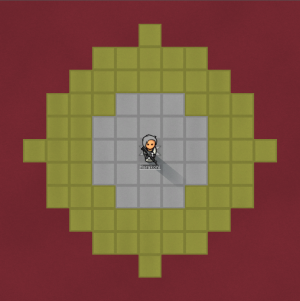 Friendly fire is a mechanic in which ranged attacks that missed their target have chance to hit nearby targets, including allies. As such it is important to be careful when you shoot at enemies while allies are in the way or near them, as they may have a chance of being hit as well.

There are several subsidiary mechanics in this process.

First, there is radius of immunity around the shooter in which friendly targets cannot be hit by missed attacks at all. Colonists can shoot over the shoulders of allies up to 5 tiles away from them, but any further and they may be hit. In the image to the right the two radii are displayed. Any pawn standing on a gold or sterile tile cannot be hit by friendly fire by a pawn standing in the center. The inner radius of sterile tiles defines an area in which no pawn standing on one of these tiles will hit any other allied pawn also standing on a sterile tile with friendly fire. Both of these are still the case, even if the actual target is also within with radius. Note that standing inside an open door invalidates this immunity for some reason, allowing pawns to be hit with friendly fire even if inside these radii.

The game keeps track of all combat actions done by a pawn. This can be accessed through the 'Log' tab for a character, and lets you review combat after the battle has finished or in the heat of it.

Each action is accompanied by some flavor text.