Daylight, or natural light, is the light generated on unroofed tiles throughout the map. The timing and strength of daylight is affected by latitude, time of year, and time of day, due to the planet's apparent axial tilt.

Note that the below values represent the number of hours that the light level is above 30%, meaning there is no guarantee that it will reach 100%. 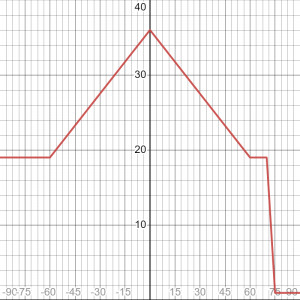 The following is a simplified explanation of the procedure by which the game determines the light intensity supplied by the sun at a given latitude, day of the year, and time of day.

Interestingly, while some effects are applied differently above latitude 70 (70° N), these do not seem to apply below -70 (70° S).

For the artificial flooring, see Floors.

Besides their use in power generation, they can also be used to heat bases and greenhouses without the need for electricity or fuel by sealing them in. Like any means of temperature regulation, geysers require an enclosed and enroofed room to actually cause a change in heat. If you don't want heat, keep the geothermal room without a roof.

Weather events occur from time to time depending on the biome and time of year, with the current weather listed at the right edge of the screen. When a weather event ends the weather returns to Clear. Each weather event has a general effect on wind speed. Wind speed continually varies between 0% to 100% but it is not displayed onscreen. Wind speed is a direct multiplier of a wind turbine's power output. At 50% wind speed a wind turbine produces 1500W of its 3450W max. The "weather controller" condition causer

can force a single type of weather to constantly appear, and will only allow natural changes in weather once it is destroyed. 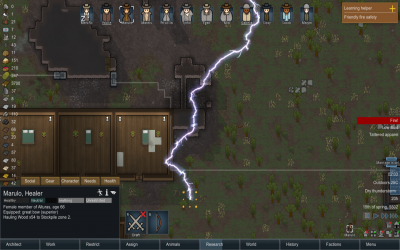 Lightning is created either naturally through thunder and flashstorms, or artificially with the flashstorm psycast