An industrial lamp which lights an area brightly enough to grow crops, but consumes a huge amount of power. Automatically turns itself off at night.

Sun lamps provide artificial light to roofed growing zones (greenhouses) at high power expense (2,900 watts). This not only speeds up plant growth, but allows a colony a roofed "indoors" area to temperature-control its growing fields, and protects the crops from unpredictable events such as toxic fallout and volcanic winters. It is constructed with

A sun lamp will illuminate tiles within a five-tile radius at 100%, enough for any crops to grow, and then another 8 tiles beyond that (13 total) at over 30%, enough for colonists to move and perform any work without penalty. The lamp blueprint will show the outline of its plant-growing light radius until it is placed. Once the blueprint has been placed, the light radius won't be visible again until the lamp has been built (but you can easily select "Build copy" and place it over the original to renew the visual footprint for quick reference).

Multiple overlapping sunlamps do not add to the speed of crop growth; once crops have the light they need, they don't need any more.

Once installed, the lamp menu offers the option to create a growing zone that matches that lit radius (100 tiles in total and excluding the center tile occupied by the lamp itself).

Sun lamps automatically turn themselves on at 06:00, and then off again at 19:12 to save power while the plants are resting. This energy-use pattern means that while they have a peak power draw of -2,900 W, they only consume -1595 W⋅Days, and that they can be efficiently powered by solar panels.

A sun lamp heats at a rate of 3 heat per second (see greenhouses, below). [Exact mechanic unclear] 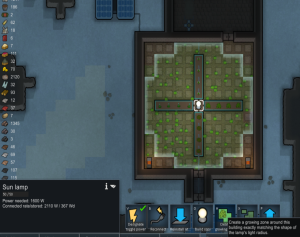 A sun lamp in a simple greenhouse, with four 1x4 hydroponics basins (in the shape of a "+"). Heaters are in the lower corners. Doubling the outer walls would provide better insulation against the freezing temperatures outside.

Rain on a powered sun lamp will cause short circuits and fires. A roof will prevent this.*

If the area is unroofed, you can simply switch the sun lamp off during rain to prevent shorts. In biomes with a growing season, turning off the sun lamp and removing the roof can help save power when the weather is warm.

(* When planning/building a greenhouse larger than the growing area covered by the sun lamp itself (e.g. for stockpiles, multiple sun lamps or other structures), remember that a roof will collapse if further than 6 tiles from a wall or column, which is only 1 tile further than the sun lamp's effective growing radius. The four unlit "corners" beyond that footprint (see image, below) are safe places to plan for this sort of expansion.) 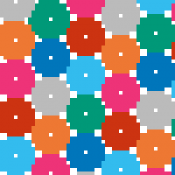 An efficient pattern to fit multiple sun lamps together. There are 10 empty tiles per sun lamp, half as many as in a simple grid pattern.

Sun lamps allow indoor growing but don't produce significant* heat for an area as large as they light, so heaters may be required to attain proper conditions for plant growth. Solar flares will cut the power, so prepare a shelf with emergency wood to build campfires to keep the room temperature above -10°C/14°F (below which most plants will rapidly die). Double-width walls provide more insulation against temperature changes (and thus save power on heaters or coolers), as well as offering better protection from attacks.

(* Experimentation shows that sun lamps can significantly heat a very small space, but not a full "growing area". In a 10°C (50°F) environment (the minimum temperature for plants to grow), a single sun lamp in a 1x2 space, surrounded by double walls, heated to a final maximum of around 85-90°C (185-190°F). However that same lone sun lamp in an 11x11 double-walled space (a square fitting the growing area lit by the sun lamp, similar to the image above right) only slowly heated to around 18°C (65°F) over the course of a day before it turned back off. So it certainly contributes, but by itself is only a small buffer against dropping temperatures.)

Sun lamps with crops placed on dirt (as opposed to a complex hydroponics set up) can allow growth of crops even during a toxic fallout, or in a cold biome with no growing season. If you maintain proper growing temperature, a dirt floor greenhouse will have 100% fertility on normal soil and 140% on fertile soil.

As they cannot be grown under roofs, trees such as pine, birch, saguaro or cocoa trees may not be grown in completely closed greenhouses. They may only be grown in greenhouses with roofs open in a grid pattern, and those leak a lot of temperature-controlled air. 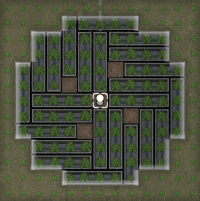 Hydroponics basins boost plant growth to 280% speed and do not require soil. However, they can only grow certain crops and are absolutely dependent on electricity. If a hydroponics basin loses power, all plants growing there will die quickly, leaving little time to harvest what can be salvaged. The (optimal?) configuration in the image (left) fits 24 hydroponics basins under a single sun lamp, for a total of 96 hydroponic growing spaces and only 4 grow-lit dirt tiles.

If you have biofuel refineries available, you can use food produced by hydroponics to fuel chemfuel generators to help power the greenhouse array. This is so efficient that it violates thermodynamics, and leaves you with spare food for your colonists as well.

(In 1.0 you need to place the sun lamp's growing zone manually. It can be made as a plus sign (+) in which each line is 5 tiles wide by 11 tiles long, with a 9 by 9 square in the middle. You can use the Planning tool to map this zone before placing your sun lamp.)