Stores electricity for later use. Charged batteries explode when exposed to rain or fire.

The battery is an electric device that stores power to use when needed.

Batteries can be be constructed with

2 Components and 800 ticks (13.33 secs) after the Batteries research has completed. 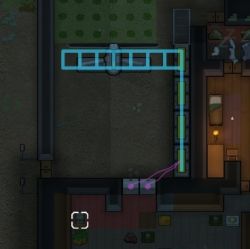 Batteries connect directly to the wind turbine and the attached coolers, with no conduits. This power grid will only "Zzztt" if the batteries get rained on.

Batteries automatically charge and discharge when connected to other buildings. Each battery can store 600 Wd (Watt-days) of power at once. 1 Watt-day is equal to powering a 1 W appliance for 24 hours. However, batteries have a 50% efficiency, meaning they take in only half of a grid's excess power. For example, an excess of 200 W for 24 hours will only store 100 Wd. Power is evenly divided between all connected batteries. There is no limit or penalty for power output.

Each tile of battery will also transfer an infinite amount of power through it, as if it were a power conduit. Therefore, electric appliances like standing lamps can connect within 6 tiles of a battery. The battery can't connect in the same way; it requires an adjacent conduit, battery, or power generator to power. A wire will appear when a valid connection is made; you may need to use the Reconnect gizmo on the appliance for it to be powered.

Batteries lose 5 W of stored power per day, even if they aren't connected to anything or are uninstalled in their minified state. Batteries can't be turned off, but a power switch can disconnect them from other buildings.

An installed battery will short-circuit (the Zzzt... event) if left in the rain or snow without a roof. In addition, each battery's storage contributes towards the random short-circuit event, which can happen so long as a power conduit is connected. However, a battery-only grid is immune to the random event.

Like other furniture, batteries are not subject to deterioration, but short-circuits from rain or snow cause damage. Their health does not impact power storage, discharge, or any other function. Temperature also has no effect past fire creation. However, they can explode when reaching a low enough health.

Batteries are most useful when using wind turbines or solar panels, both which are highly variable power sources. Using a battery creates a 'cushion', making their power more reliable. For instance, a battery is required to use any sort of solar power at night or during an eclipse. Meanwhile, fueled generators are consistent - they'll burn their fuel at a constant rate, even if it would be wasted. While you could just turn the generator off, colonists need to walk to the generator. Using a battery can help save on both fuel and micromanagement.

Even in colonies that do not use wind or solar energy, batteries are useful to cover spikes in power usage, such as short-circuits, turret arrays, or electric smelters. A battery can cover arbitrarily high power needs, the size of the array only changes for how long that is possible. As an example, an array of 20 mini-turrets and 4 autocannon turrets draws 3200 W of power. Instead of building another geothermal generator, each battery will power this for more than 4 in-game hours.

Uninstalled batteries can be used whenever power needs to be transported. They can be used to power remote deep drills, or even put on a caravan. This allows for electric appliances like mini-turrets to be used far away from your base.

Separating your batteries behind stone walls will help keep fire from spreading. As you'll rarely need to access a battery itself, stone doors can be safely used for "battery rooms". You may want to keep some additional batteries behind a power switch on a separate network, so they can be brought online in the case of a "Zzzt event". Alternatively, you can uninstall batteries and keep them in a warehouse. Either way, the discharge is negligible.

When powering an emergency array, the battery group should be isolated. There should be 1 power switch to the main power grid, which should be turned on or off when needed. This keeps your power safe from a short circuit. When powering a security array, you can place another, separate switch connected to your turrets, to easily power them on or off.

Unused electric work benches and powered appliances can be turned off to reduce total power usage, via the Designate toggle power order in the work bench menu. This requires a pawn to travel to the appliance and manually turn it off or on. A faster alternative to the Designate Toggle Power order is to build a single piece of power conduit unattached to any power source near the work bench. The Reconnect order from the work bench menu will instantly toggle power connection between the unpowered, solo conduit and your main power grid, saving power usage without requiring work or travel from your pawns.

When calculating power capacity, keep in mind that charge efficiency is only 50%; half of the excess energy is lost. This is particularly relevant when planning a sun lamp setup. The lamp draws 2900 W during the day, and 0 W during the night, for an average demand of 1595 W. However, an average power of 1595 W is not sufficient, and only enough to power the lamp for 6 hours. Simply adding more batteries will not change this; the problem is the lack of energy. In this scenario, adding another solar generator would be enough to power the lamp.