Snow is created on unroofed areas during snowy weather, i.e. "rain" when the temperature is freezing. It can be removed by Fire, steam geysers, lightning, colonists when designated with the Snow Clear Zone, and by temperatures above 0 °C (32 °F). 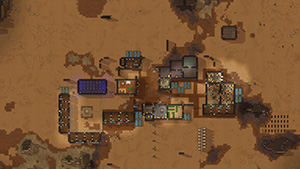 A desert colony in summer, and... 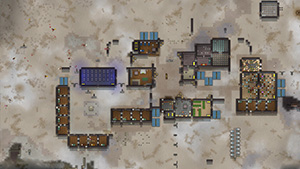 ... the same colony in winter. Not all biomes will have snow.

Colonists may build snowmen as a recreational activity when there is snow on the ground.

There are two types of snowy weather: gentle snow and hard snow. These can occur at temperatures of -0.5 °C (31.1 °F) and below.

In snowy weather, snow gathers on the ground as long as it is unroofed. Various depths of snow exist, with deeper levels hindering movement more.

The melting rate of snow from ambient temperature is found using the following table:

As a result, snow will not be melted by ambient temperatures of 0 °C (32 °F) or less, and the higher the temperature the faster the snow will melt.