Psycasts are psychic powers available to pawns with psylink levels, added by the Royalty DLC.

An organic connection to a larger psychic field. This allows a person to use specific psychic powers that they have learned to influence reality in ways that seem impossible. Higher levels of psylink permit the use of more powers. Regardless of psylink level, a person can only use specific powers that they have learned. Psylink comes from a variety of sources. Single-use psylink neuroformer devices can create a psylink. Tribal peoples also know how to develop it through ritual linking with psychically-connected lifeforms. As a physical phenomenon in the brain, psylink is poorly-understood by scientists, not least because it seems to actively conceal itself if studied too closely. One thing most agree on is that it somehow connects people to archotechs and harnesses their power, possibly through some sort of negotiation or sympathy mechanism.

To use psycasts, a pawn must first have a Psylink level equal or greater than the level of the chosen psycast. A pawn may have up to 6 levels of psylink, and these levels can be gained through several different methods:

Further psycasts can be gained by using a Psytrainer which grants the specific psycast mentioned in their name. Additional psycasts are available for purchase from traders, with Empire bases and traders having the most, and tribals having the least. A psycaster can learn any number of psycasts through psytrainers, up to and including every psycast in the game and limited only by the availability of psytrainers themselves. N.b. if using a psytrainer for a level higher than the current psylink level of the user, the learned psycast will replaced the one usually gained for that level when that level is acheived. Given using the psytrainer after gaining that level either grants an additional power or does not work and thus does not consume the psytrainer, it is always best to only use psytrainers after the required psylink level has been achieved.

A psycaster's effectiveness is controlled by three primary factors: their Neural Heat Limit, their available Psyfocus and the Psychic Sensitivity of their target.

Despite being called "heat", neural heat is not a measure of temperature. It refers to a type of chaotic psychic energy in the mind which is built up when using psychic powers and dissipates over the course of a few seconds or minutes. If neural heat is pushed past normal limits, it may cause temporary psychic breakdown and unconsciousness due to psychic shock. These conditions don't cause permanent damage.

A psycaster's neural heat limit is the primary limitation to how many psycasts they can perform in a given period of time. Each psycast gives the caster a certain amount of neural heat. As long as a pawn stays within their neural heat limit, they'll suffer no ill effects. By default, a pawn will not use a psycast if the neural heat gain would cause them to exceed their limit. This will be represented by the psycast's icon being greyed out on the UI. A pawn can be instructed to ignore their normal heat limit by clicking on the "Neural Heat Limiter", but exceeding the limit can cause psychic breakdown.

The equation for a pawn's neural heat limit is:

Assuming 100% psychic sensitivity, this in the following:

The in-game meter for neural heat is rounded to the nearest integer, but in-game behavior suggests that the actual decimal value of heat is tracked by the game, as psycasts may sometimes say they have insufficient heat limit to cast even when the spare heat displayed on the pawn's neural heat meter exactly equals the casting cost.

Heat naturally decreases over time, with faster rates provided by additional levels of psylink. Unlike the neural heat limit, it is not affected by the pawn's psychic sensitivity. The default rate of reduction for a pawn without a psylink or with a level 1 psylink is 0.54/s. Every additional psylink level increases the rate by 12.5%. In addition, the pain currently felt by the psycasting pawn adds an additional increase in rate proportional to the primary rate multiplied by three times the pain percentage e.g. at 100% pain, the psycaster will recover neural heat at 400% of their normal rate.

The resulting value follows the equation, assuming at least 1 level of psylink.

Deep psychic destabilization of the mind. Psychic breakdown last for days, causing mental disturbances of various kinds. It resolves itself with time.

For example, this means that if a pawn is consistently kept at 170% of the neural heat limit, they will, on average, increase the severity of their psychic breakdown by +4 every 2 hours. Note that this is only an average value over time.

In addition, if a pawn reaches twice their normal neural heat limit, they'll immediately be incapacitated by psychic shock for 3 in-game hours, in addition to the effects of any psychic breakdown that may develop.

Because the severity and duration of the psychic breakdown, as well as the chances of it in the first place, depend on how long and by how much your pawn has exceeded their heat limit using equipment that improves psychic sensitivity or neural heat loss can help minimize or even avoid psychic breakdowns even if you have to turn off the neural heat limit during combat.

In addition to the neural heat increase, each psycast consumes a certain percent of psyfocus. Unlike neural heat, psyfocus costs are the same for every caster, and there is no way to exceed or bypass a psyfocus cost. If the psycaster has insufficient psyfocus for the psycast, it cannot be cast at all. Level 3+ psycasts also require the user to have a minimum level of psyfocus stored in order to be useable:

There are 6 different types of objects that a pawn can meditate to:

The rate of psyfocus gain from meditation can further be increased in the following ways:

In any case, foci will never truly "add up". Each nearby sculpture past the first only increases psyfocus by +1-2%, rather than its full psyfocus value. Having multiple unrelated foci together will not have an extra effect. For example, a pawn cannot use a meditation throne and brazier at the same time, even if they have access to both the Dignified and the Flame meditation types. The better of the two foci will be used in any scenario.

Other than meditation, the following methods will increase a pawn's psyfocus:

A user's psychic sensitivity increases the neural heat they can use. The user's sensitivity does not directly increase the duration, impact, or range of any psycast, unless they are also the target.

Out of all the psycasts, only Blinding Pulse has its impact increased by the target's sensitivity. Increased sensitivity results in higher blinding.[Verify]

Thus the maximum psychic sensitivity possible would be a psychically hypersensitive pawn, genetically modified with super psy-sensitivity, psychically bonded to a pawn on the same map, blinded and with the Blind psysense precept, with a legendary Eltex staff, vest, shirt, robe and skullcap and an implanted psychic sensitizer for a total value of 538% psychic sensitivity and a neural heat limit, assuming psylink level 6, of 430.

A psycast is the ability performed by the psycaster. A Psycaster can only perform psycasts of a level equal to or below their psylink level. For example, to manifest Beckon, the psycaster would require psylink level 3.

Officially added in 1.2, these psycasts cost a great amount of psyfocus in return for some useful utility, often outside combat. 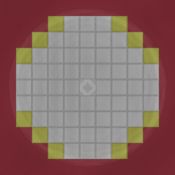 Radius of the skipshield with unshielded area denoted in red, partially shielded areas in gold (see Note left).
Note that despite the shield visually extending beyond the tiles, it does not protect them.

Psycasts can be used to great tactical advantage- provided that you can get in range of the enemy to use them.