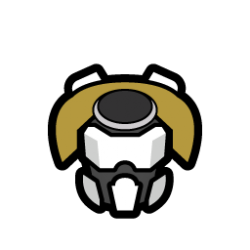 A suit of powered armor. Layered plasteel-weave plates are very effective at stopping attacks, with few vulnerable joint sections. Neuro-memetic assistors allow a human to wear the armor and still move easily.
Expensive and beautiful, prestige armor like this is usually made for those of high status. Embedded eltex threads also enhance the wearer's psychic sensitivity.

Prestige marine armor is a set of power armor introduced by the Royalty DLC that forms a full set along with the Prestige marine helmet. It combines the defensive ability of Marine armor with additional the psychic boosts of Eltex apparel.

prestige marine armor increases the rate that suppression is lost by 30% per day. This stacks additively with all other forms of suppression loss rate offsets.

Prestige marine armor can be crafted at a Fabrication bench once the Marine armor research project has been completed. Each set requires

Alternatively, the armor can be received as a quest reward, purchased from traders, or found on Raiders.

Prestige marine armor improves a pawns Psychic Sensitivity by 5%, and improves the pawn's base neural heat recovery rate by 0.033 heat per second, though this will be modified by their psylink level. This primarily improves a pawns psychic power, but note that it also makes them more susceptible to psycasts themselves, as well as psychic drones. This increase is inferior to the Eltex vest that the prestige marine armor replaces, but in exchange it is significantly more protective.

Compared a flak vest and duster, the marine armor offers strictly superior protection to the arms and legs when all items are the same quality, regardless of duster material. The interactions of two layers are dictated by the games Armor Rating calculations, and the result is that marine armor provides torso, neck and shoulders protection approximately equivalent to the combination of a devilstrand duster and flak vest, assuming all items are the same quality. However replacing the devilstrand with hyperweave or thrumbofur results in more protection to those areas. So while marine armor is more protective than a devilstrand duster and flak vest, when compared to better duster materials, the overall impact of the opposing traits of superior arm and leg protection and inferior torso, neck and shoulder protection on pawn survivability is currently unclear. However in this comparison, it should be noted that several vital organs are in the torso and the destruction of these can result in immediate death. It should also be noted that marine armor comes with a Move Speed debuff of -0.40 c\s, while a flak vest has a penalty of only -0.12c/s meaning there may be a reason to choose the flak vest and duster even with inferior protection.

It occupies both the overgarments, middle, and shell layers, while flak vests only occupy the middle layer - meaning it can't be worn with tribalwear.

Prestige marine armor also appeases the middle and outer torso requirements of all nobles, replacing both the Formal vest/Corset and the Prestige robe.