Apparel is worn by your colonists to protect them from extreme temperatures or from damage in combat. See a pawn's Gear tab to see what apparel they are wearing. 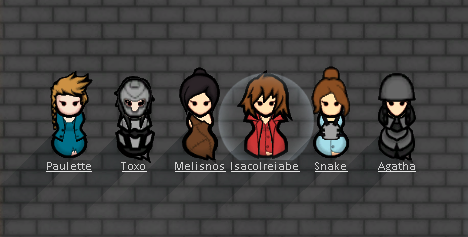 Examples of different apparel, including both clothing and armor

There are two main types of apparel, clothing and armor. Both clothing and armor use the same basic mechanics and the distinction is largely arbitrary beyond its use in sorting items. They can be mixed and matched, as far as Clothing Layers allow.

Colonists wearing protective apparel have a chance of outright avoiding all damage from an attack, as the item can sometimes utterly deflect a bullet or a melee strike. This will be represented by a "tink" sound and a spark. They may also receive a mitigated blow, for only half of the damage.

There are several types of armor ratings. They are expressed as percentages. The maximum armor rating per type is 200%.

The armor calculation is applied for each item of apparel the pawn is wearing that covers the targeted body part, from the outside in. Thus, if a pawn in only a duster, flak vest and tribalwear was struck in the torso, it would:

Meanwhile if struck the arm, then only the calculation would only be performed for the duster, as neither the vest nor tribalwear cover the arm. And if they were struck in the head, then the damage would be directly applied to the pawn as nothing covers that part. Alternatively, if the pawn was wearing a item that occupies multiple layers, such as wearing Marine armor in place of the duster and flak vest, they are only calculated against on their outer-most layer, leaving the other layer(s) they occupy effectively unarmored. Thus in that example, a strike to the torso would calculate against the marine armor once, then the tribalwear, before any remaining damage being applied to the pawn. Armor that takes up multiple layers typically has higher armor values to make up for this, however, so they can often still be worthwhile, especially when armor penetration is accounted for. See the Analysis section below for details.

In-game this is calculated as follows:

If the damage is Sharp, and any layer halves the damage, then any resulting damage to the pawn will be changed to Blunt damage.

Note: despite the common misconception, the armor effect of layers below will still be calculated against the sharp armor rating of those layers, not against the blunt armor rating. So if a pawn wears a duster over a flak vest, and the duster halves the damage of an incoming sharp attack, converting it to blunt damage in the process, the flak vest will still use its sharp armor rating for its attempt at mitigating the damage.

Heat armor works to prevent Flame damage from injuring the pawn using the same process as any other armor and damage type, but any Flame damage that actually deals damage to the pawn has a chance to set the pawn on fire. This ignition chance is the same regardless of the damage dealt to the pawn, so long as some damage is actually dealt. Thus if the Heat Armor does not outright negate the damage, it otherwise does nothing to prevent the pawn from being ignited.

While Burn damage is otherwise identical to Flame damage, including its interaction with heat armor, it cannot ignite pawns.

Thus each effective point of armor gives 0.5% to harmlessly deflect damage, and another 0.5% chance to mitigate it, instead receiving half the damage as blunt damage. Each effective armor point below 100% results in a net 0.75% reduction in damage, while each point above results in a 0.25% reduction. This means that at 200% effective armor rating, colonists will be completely immune to damage; this currently works only on heat damage which lacks armor penetration, and can be seen on mechanoids. Cataphract armor at Legendary quality comes at a close second, reaching 200% sharp rating, but all sharp attacks have armor penetration meaning that even a pawn hit too many times will fall.

Armor is calculated per item of apparel, from the item occupying the outermost layer in. Armor mitigation does stack multiplicatively, e.g. two pieces of armor layered on top of each other can each mitigate the damage by 50%, reducing it to 25% of the base damage. Each layer also has an independent chance to entirely negate the damage, using the above calculation steps.

Armor Penetration is applied identically to each layer. This means that, while multiple layers of armor each have more chances to mitigate the damage, layering apparel with low armor values may do little or nothing against projectiles with high armor penetration, while a single layer of high armor value may be able to mitigate it.

For example a pawn with both a devilstrand shirt with sharp armor of 28% and a toughskin gland with sharp armor 35% would always receive full damage from a charge rifle, as its armor penetration of 35% completely nullifies the protection of both items. This is why higher armor values may be preferable over multiple layers of much lower armor values. However there is little reason not to stack the best protection on your pawns when the items not mutually exclusive. A hyperweave shirt might still stop an assault rifle bullet that penetrates a flak vest, and it could be the only thing protecting the pawns arm.

Note that armor does not stop weapons with sufficient stopping power from staggering colonists, even if the damage is deflected.

Apparel, including armor, takes damage from several factors. It takes 1 HP of damage for every 4 points of damage dealt to the wearer, provided the damage is applied to that layer and location. Thus, if an attack hits a pawn's torso and is stopped by apparel on the Outer layer, such as a Duster, the duster will receive damage, but a torso-covering item on Middle layer, such as a Flak vest will receive no damage. If the duster were to halve the damage instead, then the flak vest would receive half of the durability damage, while the duster would receive full damage.

The damage to the item is the same regardless of whether it deflects all the damage, half the damage, or no damage, just so long as the attack is calculated against that item. The durability damage is calculated off of the raw damage as it reaches that layer, before that layer's mitigation is applied. Therefore, as quality does not affect an item's HP, high-quality armor lasts about as long as low-quality armor in combat, but will better protect lower layers from damage.

Apparel also takes damage when the pawn wearing it is on fire. Each time the fire deals damage to the pawn, it deals the same amount of damage to a random piece of worn apparel.

All apparel worn by a pawn has a 40% chance to take 1 HP of damage each day (so on average, each piece of apparel takes about 0.4 HP of damage per day). This effect is only applied to pawns in a map - pawns in caravans, transport pods etc do not suffer apparel damage in this way.

Finally, when a pawn is killed by an attack, all worn apparel takes anywhere between 15% and 40% of its current hit points in damage. 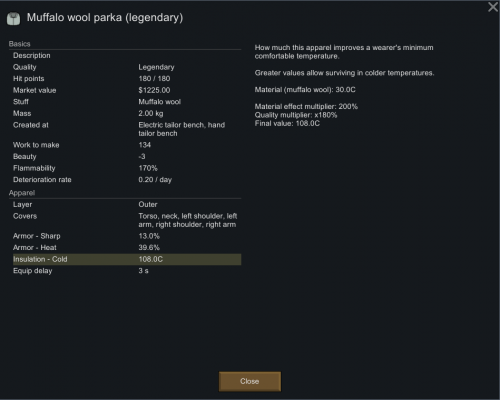 Insulation from a single piece of apparel

Total insulation for a pawn 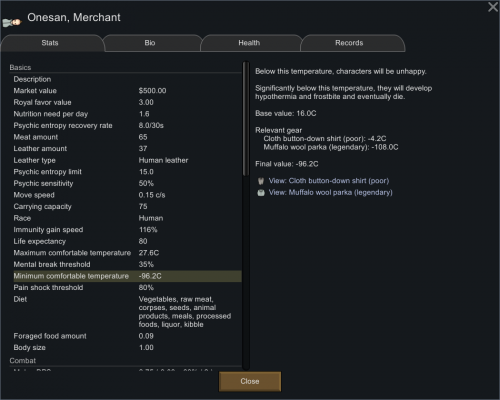 For example, consider a pawn wearing a legendary muffalo wool parka and a poor quality cloth button-down shirt. By default, humans have an acceptable temperature range of 16°C - 26°C. We can find the new temperature range by computing the insulation from the clothing, then adding to the base insulation:

Adding to base insulation

How likely the item is to burst into flames while in storage. Often Heat Protection and this value are related. It is entirely dependent on the material.

It is unclear if it affects the chance for a Pawn to catch fire while standing in a burning tile.

Apparel suffers wear and tear when worn causing it to lose hit points over time. They also become damaged when the wearer is attacked, and the apparel absorbs some damage as armor.

A colonist wearing badly damaged apparel will have one of the following thoughts. These debuffs do not stack, only one is given based on the apparel with the worst condition.


Durability does not affect stats such as protection and insulation.

What constitutes the "correct" apparel for pawns depends on a variety of factors including game-stage, biome both for available materials and temperature concerns, difficulty, strategies employed, the presence or absence of DLC and even what a player considers acceptable risk. The suggested loadouts presented below represent a rough timeline suitable for comfortable biomes and moderate difficulty, and with some common sense modifications will fit most playstyles.

The synthread apparel you start with should suffice for the early game. Start hunting and begin crafting button-down shirts and dusters.

The best apparel combo for this stage of the game is button-down shirt and a pair of pants on the skin layer, a flak vest in the middle, and a duster on the top. This combination offers good amounts of protection without compromising the movement speed of a pawn.

The best combo for the late game is a pair of pants and a button down shirt on the bottom layer, a marine armor set for ranged pawns, or a set of recon armor with a shield belt for melee pawns. For Royalty

owners, cataphract armor is recommended for ranged fighters, and a set of locust armor and a shield belt is suggested for melee brawlers because of the installed jump pack that frees up an utility slot for the shield belt.

Royal pawns that are also fighters should wear the prestige versions of the Industrial - Late combo.

Pawns that are nobles and have fighting as a secondary priority, equip the pawn with full eltex gear. The recommended combo is: an eltex skullcap, an eltex robe, an eltex vest, and an eltex shirt. This is full eltex set is hard to acquire, so they can use the Royal Fighter combo or just the normal clothing requirements for the title, such as the prestige robe and formal vest.

For Nudists the opposite is true - they receive a +20 mood bonus while naked and a -3 mood penalty while clothed.

With the Ideology (DLC) installed and active, Nudity, both in required coverage and the reaction to it, instead depend on the Ideoligion

of the pawn and its precepts.

Clothing can have very specific secondary values. The more common ones are:

Clothing stripped from corpses is considered tainted apparel and is noted with a T. Colonists wearing tainted apparel gain a persistent mood debuff as long as they're wearing it- colonists with Bloodlust do not seem to mind, however.

Disposal is usually the only option as traders do not buy them (as of 0.19).

Apparel can be destroyed using a crematorium or a campfire. Simply create a "Burn apparel" bill, and be sure to uncheck anything you want to keep.

A number of Materials is available for Clothing and Armor. Not every piece supports every material and a lot of the protective power of armor and insulation of clothing actually comes from the used material, rather than something unique to the item.

These materials are primarily used for armor. It includes any metal and in rare cases, even wood or stone might be supported.

All variants of Fabric and Leathers.