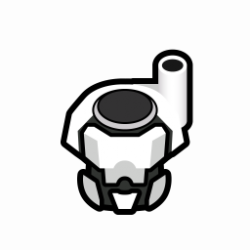 A variant of marine armor with an integrated frag launcher on the shoulder. The armor is slightly less protective than standard marine armor. The launcher can only hold a limited amount of ammo and must be reloaded after use.
Grenadiers usually specialize in breaching buildings or internal ship bulkheads. While not effective at very long range, grenadiers can be surprisingly deadly in confined quarters.

Grenadier armor is a set of power armor that can effectively block gunshots, cuts, blunt trauma, or burns while allowing the user to launch frag grenades. It is a variant of Marine armor and forms a full set along with the Marine helmet

Grenadier armor can be crafted at a Fabrication bench once the Marine armor research project has been completed. Each set requires

Alternatively, the armor can be received as a quest reward, purchased from traders, or found on Raiders.

While less protective against all damage types compared to the base marine armor, the grenadier armor incorporates an integrated frag launcher.

Like marine armor, it slows its wearer's move speed by −0.40 c/s while equipped.

When worn by a slave

, grenadier armor increases the rate that suppression is lost by 30% per day. This stacks additively with all other forms of suppression loss rate offsets.

Grenadier armor contains an integrated grenade launcher with similar stats to frag grenades but which does not prevent the wearer from using another weapon nor a utility item. Up to two grenades can be launched before the launcher must be reloaded at a cost of

25 steel per grenade. The process takes 60 ticks (1 sec). The grenades can be reloaded individually or all at once. The pawn will never automatically use the launcher - instead it must be manually activated by the player similar to Utility items. It is unclear if this restriction also applies to NPCs.[Fact Check]

The warmup time before firing the launcher is affected by the Aiming Time stat of the wearer.

While less protective than Marine Armor, it gives the user the ability to launch up to two frag grenades at will before requiring a reload. These weapons are equivalent to the regular thrown variant but do not take up a weapon slot. This can be useful to give the user flexibility in combat, such as giving snipers a crowd control option.

Grenadier armor is a half step below Marine armor, the middle tier power armor, in terms of protection. While it is still as or more protective than an equivalent set of Recon armor, it only really maintains its superiority against sharp threats. Against secondary threats like blunt and fire, it is largely equivalent. Unlike marine armor, recon armor of better quality offers superior protection, while for some tiers it must be 2 tiers higher than a set of Cataphract armor to be more protective.

Compared a flak vest and duster, the grenadier armor offers strictly superior protection to the arms and legs when all items are the same quality, regardless of duster material. The interactions of two layers are dictated by the games Armor Rating calculations, and the result is that grenadier armor provides torso, neck and shoulders protection approximately equivalent to the combination of a devilstrand duster and flak vest, assuming all items are the same quality. However replacing the devilstrand with hyperweave or thrumbofur results in more protection to those areas. So while grenadier armor is more protective than a devilstrand duster and flak vest, when compared to better duster materials, the overall impact of the opposing traits of superior arm and leg protection and inferior torso, neck and shoulder protection on pawn survivability is currently unclear. However in this comparison, it should be noted that several vital organs are in the torso and the destruction of these can result in immediate death. It should also be noted that grenadier armor comes with a Move Speed debuff of -0.40 c\s, while a flak vest has a penalty of only -0.12c/s meaning there may be a reason to choose the flak vest and duster even with inferior protection.

It appears that this armor was originally meant to be worn by Imperial Grenadiers as implied by the item description. This is further evidenced by the Version 1.3.3066 patch notes which mention that they "updated" to spawn with plain marine armor. As 1.3.3066 was the first stable version with grenadiers in the game, added as part of the Breacher raids that update brought, they must have spawned with Grenadier armor in unstable or internal testing versions prior to this.

It is unknown why this was changed. The most obvious theories are:

However, without confirmation from Ludeon staff, these remain only theories.