The incendiary launcher is a weapon that fires bolts that deal low damage but can start fires and ignite enemies.

Incendiary launchers can also be purchased from outlander and orbital combat suppliers, outlander settlements, or obtained from the following raider kinds:

The incendiary launcher creates a "plus-shaped" explosion, which deals 10 Flame damage and causes fire. Fire spreads through flammable surfaces, and causes pawns to take damage over time and run around helplessly. Unlike frag grenades, the fiery explosions are deployed on impact. It has a forced miss radius of 1.9 tiles, meaning shots will land in a 1-tile radius from the intended target, including diagonal. Due to the forced miss, careful shooter is purely detrimental to its use, while trigger-happy benefits this weapon a lot. The launcher is fired like any other weapon, so is blocked by walls.

Pyromaniac pawns equipped with incendiary launchers will have a +5 Pyromaniac has incendiary weapon mood buff.

The incediary launcher is undoubtably a support weapon. It is one of the few weapons that start fires - pawns that are on fire will stop attacking and run wildly. Don't fire near your colonists. Launchers are a somewhat viable alternative for colonists with low skill or health issues, due to the forced miss negating shooting accuracy.

Manual oversight is very helpful when using explosive weapons, as pawns won't lead their fire or care about collateral damage. Explosives in general are very inaccurate against moving targets, so try to avoid targeting those if you can. Creating a flammable structure/room, luring or trapping raiders in, and lighting it on fire is a valid crowd control tactic, albiet a costly one.

Fire becomes much less useful as you enter the mid- and lategame. Mechanoids are immune to fire, high-tech raiders start to wear more heat resistant apparel (which doesn't prevent ignition, just the damage), and there'll be too many tribespeople for a single launcher to supress.

Because it relies on fires, rain significantly diminishes its utility. Note that the game has a "firewatcher", and will automatically start rain if fires get too out of control.

Compared to molotov cocktails, the incendiary launcher sacrifices rate of fire for significantly faster projectiles and a doubled range. This makes launchers better in certain supportive and defensive roles, where colonists can sit back and distract enemies. The range also makes the launcher safer to use, and easier to not cause friendly fire. Molotovs are quicker to deploy, so may be more useful in starting large fires and with general flexibility.

Outside of combat, fire is useful for disposing of unwanted items, such as corpses. Create a fireproof room using stone walls and floor, fill it up with undesirable items, and watch it burn. Note that molotov cocktails fire faster, so are marginally better for this purpose.

Unilke molotovs, incendiary launchers are affected by weapon quality. This makes launchers relatively better if you have skilled crafters.

The following graphs take the incendiary launcher's effective damage and accuracy into account, using a Normal quality weapon fired from a healthy shooter against a single target. 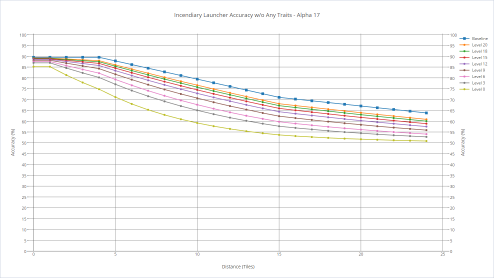 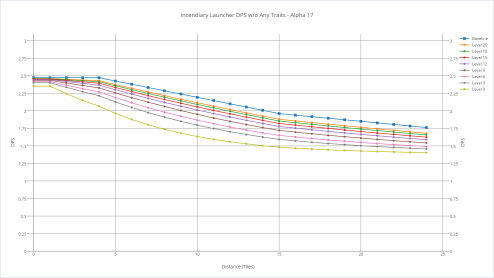 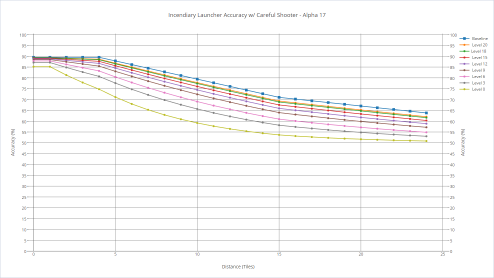 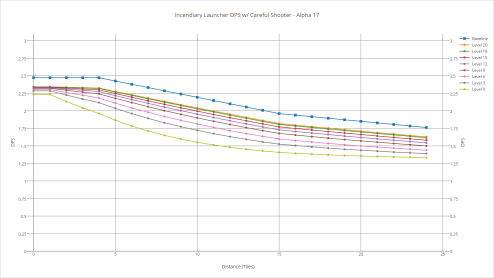 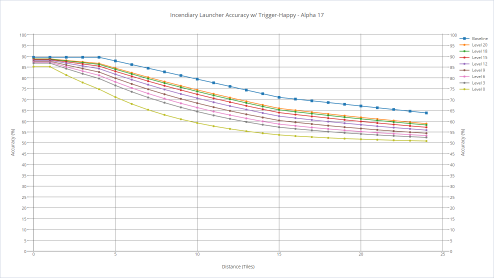 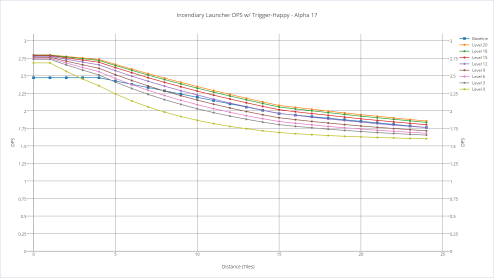