"A compact, wide-caliber slug-thrower. Very short range, but it packs a punch and handles quite well."

The heavy SMG is a moderately heavy, multi-shot ranged weapon that fires 3-shot bursts of rounds which deal a moderate amount of damage each; a moderate delay between each shot; a moderate time between bursts; slightly shorter range and moderate overall accuracy. Recommended for low skill shooters.

Heavy SMGs can be crafted at a machining table once the Gas Operation research has been completed; from

They are also commonly carried by Outlanders and Pirates and sold by traders or obtained from the following raider kinds:

The heavy SMG is a flexible, but close-quarters focused offensive weapon. Its accuracy makes it very friendly towards low Shooting skill users.

Specifically, the heavy SMG combines good low-range accuracy, decent rate of fire, and high per-shot damage to make an overall effective weapon for any skill. At said ranges, it will outdamage the machine pistol, assault rifle, and even the charge rifle (for up to 10 cells). It's worse than the chain shotgun at close-quarters fights, but has a greater max range, making it more effective for general firefights and flexible overall.

Range, though not as short as other weapons in its class, still leaves a little to be desired. Similarly to the machine pistol, the heavy SMG's stopping power isn't high enough to stagger humans, only small animals like tortoises and boomrats.

The heavy SMG is best paired with a careful shooter up to level 13, then with a trigger-happy shooter beyond that point.

The graphs assume a normal quality heavy SMG against an adult human that's out in the open in clear weather. For DPS, projectile speed has also been factored into the equation, with the weighting based on the base amount of attacks that it'll take to put the aforementioned target into pain shock. 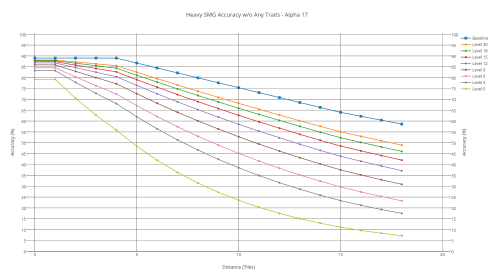 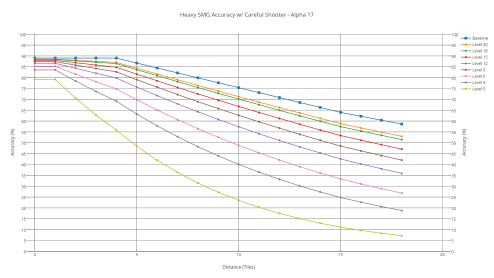 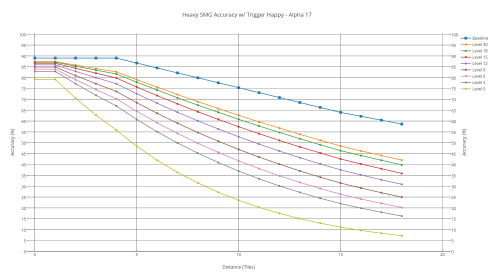