Infestations are an event and a serious threat in which a number of hives are spawned, alongside insectoid defenders. They can happen randomly or can be caused by a quest; quests will warn you if this is an outcome. Infestations can also occur upon entering rooms in an ancient complex; you will get no specific warning for this quest.

Natural infestations require an area larger than 1x1, where at least one tile has the overhead mountain roof, within 30 tiles of a colony structure. They are centered around a single "valid" tile, which must have a temperature higher than -17°C (1.4°F). Temperatures under -8°C (17.6°F) will gradually reduce the spawn chances, as does light.

Hives and insectoids will spawn within a given radius, regardless of whether those tiles are valid. A hive does not have to spawn on an infestation's center point. The initial size of an infestation is based on raid points, so infestations will get bigger as the game progresses. If the size of the event is larger than the "valid" space, it will happily expand to appear in nearby "invalid" areas, even if those areas are not directly connected.

If generated from a quest, Infestations may spawn outside in the open.

Alternatively, insectoid infestations can spawn from digging from a deep drill. They don't seem to appear outside of active digging. Insectoids, but not hives, will pop out around the drill's area. These do not have the overhead mountain requirement like regular infestations. However, they are often smaller in number, and are unable to reproduce due to the lack of hive.

The regular "spawn-proofing" tactics are hard to apply - you typically don't want colonists too cold. However, you can simply avoid deep drilling, or prepare in advance when you do.

Blue squares show an area with a chance of infestations spawning.

When spawn proofing a base, be thorough - even a single warm tile can cause a full infestation. If there is any valid tile, infestations can spread nearby into seemingly safe areas, even if there is a wall many tiles thick between.

As they require more than 1x1 of overhead mountain, you only need to build walls every second square. Only walls are capable of stopping infestations; columns and doors do not work. Note that an overhead mountain square next to an open "thin roof" area is also a valid spawn point. 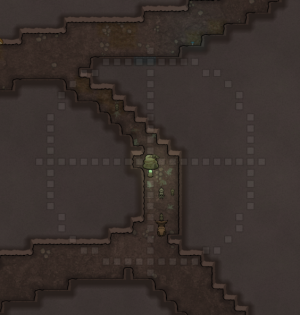 Range at which insects will defend a hive

Insectoids (Megascarabs, Megaspiders and Spelopedes) will spawn near hives and spend their time roaming around them.They will attack and chase any intruder that comes within a 10-tile circular radius from the hive that spawned them, returning to their hives once the threat is gone. Insectoids will only attack creatures they can see, and will not attack while they are sleeping, provided they are not woken up.

They will randomly dig at stone and structures while wandering around their hives, potentially breaching into new areas.

If any of the insectoids are downed or damaged, the entire infestation will go after colonists on the map, attacking and breaking down structures in the progress. Even if outside raiders or other factors (like hypothermic slowdown) down them, they will be aggressive. If insectoids don't see hostiles within 100 tiles, they will give up and return to their hives.

If the hives and insectoid colony are left intact, they will reproduce, progressively growing more numerous. But if all Megaspiders or Spelopedes are killed, the hive(s) will deteriorate due to lack of maintenance.

Infestations are most threatening in mountain bases, as they can spawn practically anywhere inside your base. In other bases, they are much less harmful - around a normal level threat. When fighting an infestation always ensure you completely annihilate every hive. If even one is left, insectoids can keep spawning and leave you back where you started.

Insectoids are melee fighters, so colonists with ranged equipment can try to kill them from a safe distance.

One way of dealing with infestations is with fire. In rooms with overhead mountain, use wooden floors on the inside, but non-flammable materials outside so that the fire doesn't spread. An IED incendiary trap or even a molotov cocktail will promptly cook the insectoids alive.

Since insectoids do not attack creatures while sleeping, it is possible to haul materials in and out of the area near their nests at night, including flammable material. This is however extremely risky, since attacking one of them, or doing construction near the insectoids, will wake them up. They also wake up when their individual need for rest has been filled, so be prepared (with all items staged in a nearby stockpile) and act quickly once they're asleep. 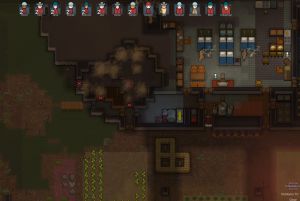 Insects are more likely to spawn in darkness, in "warm enough" temperatures, above -8°C (17.6°F). If you bait insects to spawn in a more convenient location, there's a smaller chance of them spawning inside your base.

If you are able to ensure that there is only one valid spawn location on your base map, you can prepare this area to automatically trap and kill the insects withfire when they appear. Never rely on this completely unless you know exactly what you are doing - if your base is in a mountain, be prepared for infestations no matter what.

Another good tactic to avoid or minimize this risk of them spawning in your base is by strip mining into many different mountain areas. If you then segment the spaces under the mountain into rooms around 20-40 cells big, this will allow more spaces for the infestations to spawn, and can help drastically odds of one spawning in your base, that they may rarely spawn in your base.

The arrow points to the hive itself; to the right is a glowpod. Several stacks of jelly are also next to the hive, along with the usual suspects.

Hives spawn insect jelly in stacks of 20 units every day or so. You can farm these by building walls and doors, but insects may dig out and attack your colony. You can retrieve the jelly when the insects are asleep.

Hives also spawn glow pods, which provide light for 20 days. These can be re-installed in your base once insectoids are destroyed.

Insects will give insect meat when butchered. While colonists usually dislike eating insects, it is only a -3 moodlet when cooked - a carnivore fine meal is a net +2 mood from simple meals. Insect meat can also be converted into chemfuel from a biofuel refinery, or sold as meals with no penalty.

If the "Insect Meat: Loved"

precept is used, colonies can be fed exclusively on insect meat and be ecstatic about it.

If you destroy all hives of an infestation, then any insects that are downed will become neutral. Megaspiders are an advanced trainability animal that can be tamed without a manhunter chance.