"A large, genetically-engineered beetle. Once the worker caste of an artificial ecosystem of insectoids designed to fight mechanoid invasions, it is now usually seen without its deadlier insectoid cousins. Still, its size and hard shell make it dangerous when it attacks. A eusocial creature, it cannot reproduce individually."

"Not actually a spider, the megaspider is a genetically-engineered giant insectoid the size of a bear. Designed for heavy work and combat, its thick chitinous armor makes it hard to kill, while its long deadly ripper-blades make it deadly. It is, however, quite slow in open terrain."

"A medium-sized bioengineered bug the size of a sheep. The spelopede is the middle caste of a hive, taking care of most work tasks as well as fighting with its digging claws."

Insectoids from Infestations may trigger traps, causing them to rush towards a random direction up to 100 tiles away in a single horde and then return when no hostile was found. It's best to let them retreat before striking again, to prevent them from rushing through the whole map as any tile they use to sleep will reset their range until they get back to their hives. Like pirates, they have a hostile appearance to every faction in the world(including ancients and mechanoids). 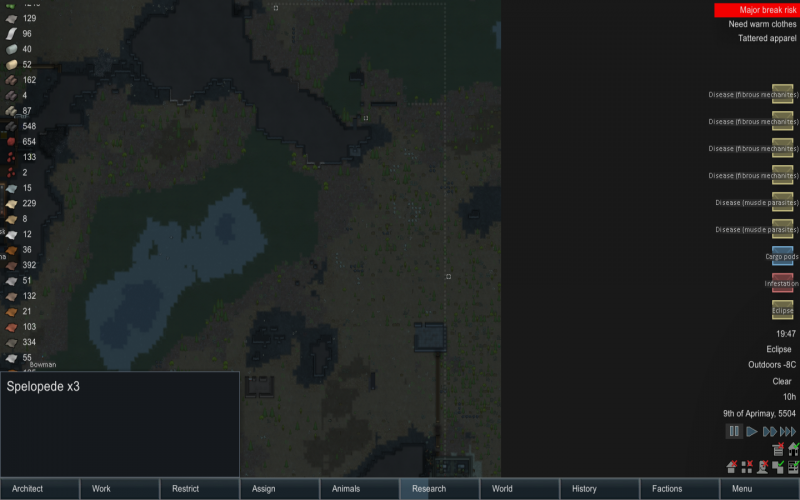 Insectoids from Infestation rushed up to 100 tiles after triggering old deadfall trap
Retrieved from "https://rimworldwiki.com/index.php?title=Insectoids&oldid=76557"
Category: