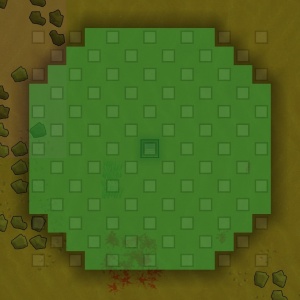 A single wall or column will support a roof in a roughly circular area 6 tiles around it.

A roof is an area of cover from the elements. They can be natural or artificial, with only minor differences between them. A roof can extend up to 6 tiles from a wall, column, rock wall, or similarly supportive structures, so roofed interiors have a maximum size of 12 cells across the shortest side. Interior areas built larger than this will remain partially unroofed without the use of additional support. Larger roofed areas can be built with the use of columns or interior walls as support pillars. Indoor roofs are automatically built by builders.

A roof will prevent rain from affecting the area underneath, prevent snow from building up, block sunlight, prevent lightning from striking the area, and enclose or partially enclose a room to help maintain its temperature.

To build or extend a roof outdoors, a "Build roof area" must first be drawn. Leaving 25% of room area or more unroofed makes the room status as "Room unroofed" which, among other effects, equalises room temperature to outside temperature.

Areas can be designated to have a roof or not have a roof by drawing either a Build roof area or Remove roof area, located under the Architect/Zone tab. This can be used to create outdoor roofed areas (to prevent rain, snowfall, or item deterioration), or indoor unroofed areas (protected Solar panels, indoor growing areas). If there is no supporting wall or rock within 6 tiles, no roof will be built.

A roof will collapse if the last supporting structure within 6 tiles is removed, whether by mining, deconstruction, or destruction. Removing the last tile of roof supporting another section of roof by deconstruction will delete the now-unsupported section but will not cause a collapse nor cause any damage. The player receives an event notification when a roof tile collapses and the game is paused.

Roof collapses cause damage to to everything and everyone underneath them, dealing injuries to pawns and damage to items. All roof collapses deal Crush damage. Thick mountain roof deals 99,999 damage with 999% AP, obliterating anything underneath it. Collapsed overhead mountain will leave collapsed rocks. Pawns and objects caught under collapsed rocks will be utterly destroyed; their bodies, gear, and inventory are unrecoverable. Destroyed items leave no scrap parts. Thick mountain roof is not removed by collapse - if the collapsed rock is mined out and a collapse is triggered again, more collapsed rock will be created indefinitely.

Normal collapsed roof remove the roof tiles in question and leaves filth in the form of building and rock rubble on the ground. Constructed and thin mountain roof deal between 15 and 30 damage with 0% AP, targeted at the "outside" and "top" of a pawn i.e. the neck of a human pawn and all its external children parts including the head.

The player can prevent roof collapse by preemptively removing roof tiles at risk. Creating a Remove roof area on the necessary tiles will prompt a colonist to safely remove thin roof.

Roof collapse can also be manipulated into a weapon to damage entire rooms of enemies at once. Use frag grenades or any ranged weapon to destroy a pillar that was supporting roof over a killbox. Alternatively, IED traps can be placed behind cheap, low HP walls or columns supporting roofs and enemies shot at when they come near it. They will take cover behind the structure, triggering the IED, detonating it, and dropping the roof on them for two sources of damage. Pathing hacks that exploit pawn preferences to avoid walking over slower terrain can also be used, such as placing IED roof drop traps on bridges over water.

The damage from thin roof drops is not enormous, but targeting the head and neck make it deadlier that it would otherwise be. Assuming the random damage range is linear between the two points,[Verify] approximately 33.3̅3% of roof collapses will do enough damage to outright destroy the head or neck and instantly kill the pawn. The 0% AP of the thin roof collapses means that helmets, and to a lesser extent, armor pieces that protect the neck, are very effective at protecting pawns however. This means that heavily armored pawns have little to fear from thin roof collapses except when extremely unlucky, while wearing legendary cataphract armor

will make you completely immune to them. This also makes Tribal raiders much more susceptible to roof drop traps than the usually better armored outlander and pirate factions.

Drawing a "Remove roof area" will cause colonists to remove a constructed roof. Constructors will automatically go and safely remove the roofs without risk of collapse. Overhead Mountains cannot be removed this way, only by triggering a collapse.

Because of the collapse protection mentioned above when removing the roof, it can be expeditious to direct pawns to only remove the outside ring of roofing to allow the inner roof area to become unsupported and vanish safely.