Glass bottles filled with flammable liquid, with a burning cloth in the neck. A favorite weapon for hooligans and desperate warriors from rim to rim.

Molotov cocktails are short ranged, thrown weapons that have a forced miss radius but deal flame damage and set a 3x3 "plus-shaped" (+) area on fire where they land. They are not consumed on use and do not use any ammo.

Molotov cocktails can be crafted at a Machining table once the Machining research project has been completed. They require

They can also be purchased from orbital pirate merchants and orbital combat suppliers, outlander faction bases, or obtained from the following raider kinds: 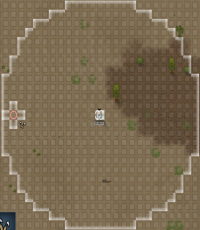 Molotov cocktails are weapons. They take up the weapon slot and will not run out of ammo. They are blocked by walls, but the blast ignores cover. When choosing a target, a circular zone will generate to indicate range, then another 3x3 indicator with a circular center will become the aiming spot.

Molotovs deal 10 Flame damage in a 1.1 tile radius. They are thrown from a very short range of 12.9 tiles and have moderate aiming time; they explode immediately on landing. With a forced miss radius of 1.9 tiles, an unobstructed molotov always lands within 1 grid tile (including diagonals) of the target. This means Shooting skill, shooting accuracy, and health of the grenadier is irrelevant. Aiming time effects still apply, however.

Flame damage will possibly ignite pawns. The impact will create chemfuel puddles, which will then ignite and burn, causing general fires.[Puddle behavior?] Pawns on fire will run wildly and are unable to attack.

Pyromaniac pawns equipped with molotov cocktails will have a +5 Pyromaniac has incendiary weapon mood buff.

When damaged with Flame damage[How much?], they may explode. The cocktails will spark and emit a hissing sound shortly before exploding some time later. The explosion deals 10 Flame damage in a 2.66 tile radius around itself.[Chemfuel puddles?] They cannot be smelted in an electric smelter.

Molotov cocktails have no quality - every set of molotovs will have the same stats, regardless of the skill of the crafter.

Molotovs are dubious in raw combat. Molotovs are better in a supporting role, being one of the few weapons that start fires. Pawns that are on fire will stop attacking and run wildly, making them easy targets. However, using a grenade-type weapon without manual oversight is prone to vulnerable positioning, inefficiency against moving targets, and unwanted collateral damage. In addition, the low range makes friendly fire harder to avoid. Due to the forced miss, they can be a viable alternative weapon for pawns with low shooting skill or health issues.

Fire becomes much less useful as you enter the mid- and lategame. Mechanoids are immune to fire, high-tech raiders start to wear more heat resistant apparel (which doesn't prevent ignition, just the damage), and there'll be too many tribespeople for a single blast to supress. Note that for humanoids, only phoenix armor

will prevent guaranteed ignition, which raiders will not wear.

When throwing a cocktail down an 1-tile wide alley, a pawn can consistently throw a cocktail 4 tiles, not including the tile the pawn is standing on, without intersecting the two side walls. Beyond 4 tiles, there is a risk of hitting the wall and dropping short. This can be relevant to prevent friendly fire or damaging defenses during combat. Watch out when using these in place of frag grenades when melee blocking, as the fire can allow enemies to clip past your blockers, allowing them to surround the blockers or attack your backline.

Because it relies on fires, rain significantly diminishes its utility. Note that the game has a "firewatcher", and will automatically start rain if fires get too out of control.

Fire is very useful to dispose of flammable items, like corpses. Simply gather all unwanted items in a fireproof room (like using stone for walls and floor), draft a pawn, and throw the cocktail. Make sure to remove the Home Area around the room, so that pawns don't try and extinguish the fire. Molotovs throw faster and are significantly cheaper to produce than incendiary launchers, so are better for this purpose. For corpses, watch out for rot stink; haul corpses quickly and wait for the rot to wear before burning.

Fire may also be used to burn flammable structures and floor, and a powerful, albeit costly tactic. Placing straw matting or wood floor where you want things to burn. Then, lure and trap raiders inside. Alternatively, you set up a mountain base to burn any infestations in your pawn's bedrooms. You can also use wooden columns/walls, which in the absence of other support, causes a Roof Collapse.

In extremely cold temperatures, fire can be a last resort in order to create heat. Use with extreme caution - fire can quickly go out of control, and temperatures easily get too hot. Typically, colonies with access to molotovs also have access to heaters.