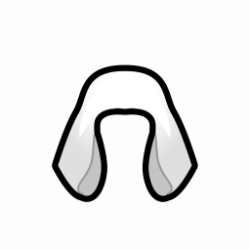 "A draped hood which covers the head and ears."

The hood is a clothing item initially added in the Royalty DLC but now part of RimWorld core. They provide a +20% increase to Social Impact.

Hoods can only be made at electric or hand tailor benches which require Complex Clothing to be researched in order to be constructed. Each hood requires

They can also be purchased from traders, and a red hood can be found on every Bestower.

Hoods compete with the wide variety of social hats available, including several added by the Royalty DLC. With little in the way of armor and not a leader in either type of insulation, hoods will typically only be used when their Social Impact bonus is required. They are inferior to, should be exchanged for, literally any other headgear unless the social impact buff is required. The hood should never be worn when protection is required - they can be worn in non-combat situations, and switched for a helmet on the battlefield

The only real other core-only competitor is the bowler hat. In comparison, the hood offers a larger social impact bonus in exchange for inferior cold resistance and 250% of the cost. That said, if the social buff is necessary the extra cost is likely worth it. And if you aren't after the social buff, why aren't you making cowboy hats or helmets?

Compared to the top and ladies hat, the hood mostly mirrors the hats but does have some advantages over them. They provide the same social impact, have the same cost, and while the hood does provide some armor to the hats' none, it is unlikely to be enough to matter. The key differences are:

Thus, unless the cold insulation is likely to be relevant, or you require the hats for your nobles anyway, the hood is superior to them.

This is one of very few items to transition between DLC and Core, originally being introduced as part of the Royalty DLC but later being integrated into the base game. The techprint is the only other known example, but it did the reverse.