Clothing is a subcategory and type of apparel that generally offers good insulation but poor protection from damage.

All apparel functions in the same way mechanically. Clothing and Armor primarily differ only in their categorisation and a tendency to either offer damage or environmental protection respectively. Therefore, see Apparel for details on the mechanics common to all types of apparel.

Clothing is typically stuffable, made from textiles, and crafted at either an hand or electric tailor bench. Clothing can be also be purchased via trade, salvaged from other humans via the strip order, or dropped by a colonist. Clothes stripped from dead bodies have the "Tainted" modifier, which lowers its value and gives a mood debuff to wearers of the piece of clothing.

Informally, specific items of clothing are often referred to as falling into one of two categories: Tribal clothing, or Industrial clothing, based on the Research necessary to craft them, and they are both pretty much self-explanatory.

Below are lists of clothing for the core game; DLC's will add additional items.

No research is necessary for these items:

* Note that Industrial colonies (including Rich Explorer starts) can never craft tribal headdresses and war masks, although they can trade for and use them.

(Note: In the context of Research, this is more properly a "medieval" technology, putting a x67% penalty on Research Speed for Tribal colonies that effectively changes the 600 point goal to a 900 point goal. Outside of Research-specific contexts, "Tribal/Industrial" clothing is the default distinction.)

Most clothing can be manufactured at the following production stations. Some few items must be crafted elsewhere (e.g. various crowns

, crafted at smithies), or are uncraftable by colonies (e.g. psychic foil helmet) and so can only be acquired via trade, quests, or from defeated raiders, etc.

Produces only tribal clothing, and with a 50% workspeed penalty.

A neolithic production facility with a 50% workspeed penalty

An upgraded hand tailor bench that grants a faster production speed while powered or at the same speed as its lesser version while without power.

Clothes are typically made from textiles - i.e. fabrics and leathers. Their stats vary heavily based on the material. Picking the right material for any piece of clothing is far from arbitrary and the default setting will just have nearly all materials checked. The algorithm by which the crafter picks which material to use is unknown.

General summaries of the primary types are available below, and specific statistics can be directly compared on the Textiles table.

Cloth is the most accessible material when wildlife is scarce. It can also be easily farmed from cotton plants or cheaply bought. It is used as baseline material in Crafting Bill Hints.

Advanced fabrics tend to have significantly better armor values and at least comparable thermal resistance values, meaning they can easily replace cloth in every application but are harder to come by.

Wool is a subtype of Fabric. Can only be acquired from domesticated animals. They offer very weak protection and are highly flammable but offer high insulation multipliers and are very easy to acquire in amounts. Care must be taken to not mix up the Wool and Leather from an animal, as they have very different values.

Leathers offer pretty good defense and are easy to acquire in most biomes as a sub product of hunting. Leather are defined by the type of animal they were taken from. While they generally provide good armor, their insulation multipliers can vary significantly - both significantly below and above cloth. They always have a high Heat and Blunt damage resistance, with low flammability.

Uniquely, the Broadwrap covers the neck and both shoulders. This causes it to be the only headgear to conflict with the Slave Collar.

The Slave Collar, is not true headgear, in terms of layer "slot". Although it does have some layer interaction, as shown by its conflict with the Broadwrap. 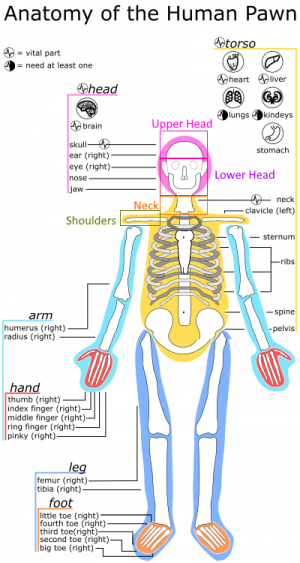 The hands and feet, across all layers, are NOT covered by any apparel present in base game. 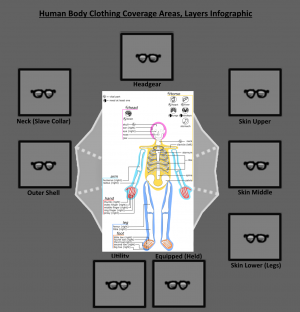