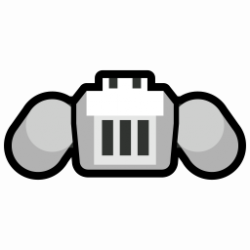 A single-person burst rocket for short-ranged flight. With its integrated harness and guidance assistant, the jump pack allows anyone to leap long distances at high speed, even over obstacles. It must be recharged after several uses.
Some spacer tech militaries have melee combat specialists who use jump packs to bypass obstacles and rapidly close with the enemy.

The jump pack is an utility item added by Royalty DLC that allows its user to make rapid rocket powered jumps to a tile within range and in line of sight.

Jump packs can be crafted at a Machining table once the Jump packs research project has been completed. The required techprint can be obtained either by trade or completing quests for the Empire. They require

Alternatively, this item can be received as a quest reward.

When equipped, a jump pack is worn in the waist utility slot. Once the wearer is drafted, it can be manually activated by the player to target any tile within a quality-dependent range and within line of sight. Therefore, a user can jump over rock chunks and fences, but not walls. There is a short 30 ticks (0.5 secs) warm-up before jumping. The warmup time before jumping is affected by the Aiming Time stat of the wearer.

Pawns cannot be hurt mid-jump, even by explosions directly under them, but can still get hit during a short warm-up before jumping. Jumps must be manually initiated by the player through use of a gizmo available while the colonist is drafted and selected. Colonists will never independently use the jump pack, and NPCs will never use it at all.

Downed allies can be carried during a jump.

The pack allows the user to make up to 5 jumps before needing to be refueled, at a cost of

20 chemfuel per charge. To refuel it, select its user and right-click a pile of chemfuel. The number of remaining charges is displayed on the gizmo.

Jump packs can allow melee fighters to quickly engage enemy gunners and force them into close combat, where the latter are generally at a great disadvantage. They can also be used to dodge explosives like mortar shells or grenades, jump over water, or to quickly escape / get into position, making them a useful utility both for brawlers and shooters. It can also be equipped on workers that frequent the edges of the map, as a manhunter pack or raid may catch them off guard.

However, keep in mind it occupies the utility slot, and thus cannot be worn with a shield belt or other utility item. Consider using the locust armor if you wish to have both jump capability and another utility item. The downside of locust armor is its comparatively low sharp armor, standing at only 87% at normal quality, beaten by the flak vest at 100% and significantly outclassed by other power armors. The ability to use a shield belt may mitigate this disadvantage, and some utility items may be worth the lower armor to be able to properly deploy however.

It is currently unknown if lower quality packs are actually faster than other methods of increase movement rates, such as archotech legs. Nevertheless, the invulnerability granted while flying will often make any loss of time irrelevant.

The distance the user can jump is dependent on the quality of the jump pack.