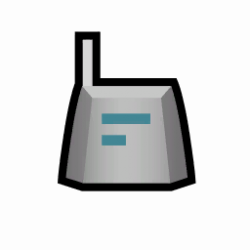 An ancient military targeting device. It signals an orbital platform to drop a mechanoid combat cluster at the targeted point. The cluster may include any mixture of mechanoids and mech defense structures.
Though they may have once had some allegiance to the ancient army that created this unit, any mechs dropped now will indiscriminately attack any human they see - including the one that summoned them.
The unit only contains one usage code, so it can only be used once.

The Orbital mech cluster targeter is a powerful single-use utility artifact that calls a mechanoid cluster down on the targeted location. These mechanoids are not allied to the user in any way, and behave as normal mechanoids do.

Orbital mech cluster targeters cannot be crafted. They can only be acquired through trade, as a quest reward, or found in ancient shrines.

When equipped, an orbital mech cluster targeter is worn in the waist utility slot. Pawns that are incapable of violence can equip, but not use, the targeter. Once the wearer is drafted, it can be manually activated by the player to target a tile within 45 tiles and within line of sight. It can be targeted under roofs of all types but pods landing on overhead mountain will cause cave-ins and create collapsed rocks, destroying the pod and its occupants in the process.

After a 3s warm-up, a mechanoid cluster will spawn in the targeted area. The warmup time before firing is affected by the Aiming Time stat of the wearer. This cluster is identical to other clusters but will never spawn with a condition causer. The mechanoids within are not allied to the user in any way, and behave as normal mechanoids do. They will be hostile to everyone except other mechanoids.

The targeter cannot be recharged or refueled - once its single charge is expended, the item is completely destroyed.

They are in every way a mech cluster you can summon, with all the help and hindrance that can bring. Use with caution and remember it does not help against other mechanoids.