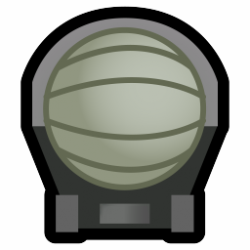 A single-use man-portable low-shield projector. Deployed on the ground, it generates a circular shield that allows bullets out but not in. The unit is designed to last only a short time before burning out.
Many ultratech combat squads owe their lives to a shield pack deployed at just the right time.

The low-shield pack is a single-use accessory added by Royalty DLC. It allows the user to deploy a circular shield that stops incoming projectiles but does not affect outgoing projectiles, or prevent pawns from moving through it.

As a complicated piece of technology, low-shield packs can only be made at the Machining table and requires Shields to be researched in order to be constructed. Crafting the armor requires 1 Shield core and

1 component. Shield cores are only available from mechanoid clusters.

Alternatively, this item can be received as a quest reward or found on Raiders.

The low-shield pack is a single-use item that deploys a shield with a radius of 4.9 tiles. After 1,800 ticks (30 secs), it burns out. During that time it stops all incoming fire from passing into the bubble but does not prevent pawns inside from firing out. A pawn does not need to be inside the shield to benefit from the effect, assuming the enemy is not inside the shield and that the shield is between them and their attacker the incoming rounds will be stopped. However, it does not prevent pawns from moving inside the shield and attacking. It is currently unknown if it is vulnerable to mortar rounds like its larger cousin, the bullet shield. However EMP grenades will disable the shield for 9 seconds, during which time the burnout timer will still count down. Futhermore, unlike Mechanoids, the shield projector will not adapt to the EMP effect. Its therefore possible to continuously disable the shield until the projector burns out.

The use of the pack creates a temporary structure called a Burnout Low-shield. It has 250hp. It is currently unknown if it can be destroyed manually.

NPCs equipped with the shield pack will deploy them when an enemy-fired projectile travels past them (friendly ranged fire will not trigger the pack). It is often much easier to acquire completed packs from NPCs than to farm mechanoid clusters for shield cores. Therefore, the ideal way to get them without deploying is to use fast melee pawns and either not used ranged or micromanage your ranged pawns to ensure that they don't target anyone near or behind the pawn with the shield pack. Bionic or archotech legs and/or a jump pack or locust armor paired with a strong melee weapon are recommended. Note also that NPCs will occasionally end up walking outside of the effect of the shield.