There are a wide variety of weapons available in RimWorld. Using them effectively can give you a sizable advantage against raiders.

There are three main categories of weapon this guide will cover:

There are also three technology levels to consider:

There are a couple of stats that are particularly important to consider in a weapon: 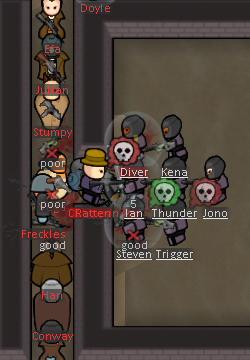 You shall not pass.

Pawns who are adjacent to each other are forced into melee combat, even if they are wielding a shotgun. A gun's barrel is quite ineffective compared to a sword. Melee lends itself well to disruptive tactics, like rushing down a sniper or grenadier, or peeling off enemies from your gunners. The melee block - create a chokepoint with 3 melee outside, where only 1 enemy can melee at a time - is extremely effective. You can have gunners fire just behind them.

The main con with melee is that damage is unavoidable. Later in the game, and especially with higher difficulties, enemies will vastly outnumber your colony. A 200 tribal raid will eventually wear down your most well-geared melee fighters, even in the best scenarios. The second con is that melee fighters will often have to approach ranged fighters, meaning it quickly becomes weaker in those situations. Animals will always fight back against a melee weapon, even against a 0% manhunter, making them terrible for hunting.

Sharp weapons are the bread and butter of melee weapons. They are the most common type of melee, dealing strong all-round damage.

When made of plasteel, a longsword of sufficient quality (2-3 levels above) can outdamage a regular monosword. A masterwork plasteel longsword will outdamage a good monosword, and roughly equal to a normal persona monosword, though it has less AP. Plasteel is much better than steel; a plasteel knife is roughly on par with a steel longsword of the same quality. The next best weapons from longswords are spears and gladiuses. Faster weapons (like knives) have some niche to training melee.

Blunt wounds do not bleed, are much less likely to destroy limbs, and blunt weapons are often weaker in DPS than their sharp counterparts. However, blunt weapons are great for penetrating armor, as most items have a poor Blunt armor rating. They also have a small chance to stun for 45 ticks (0.75 secs) on hit. In addition, non-bleeding can help with capturing prisoners. Note that enemies have a Death on Down chance from pain, so this does not increase the actual capture rate by a great amount. Weaker blunt weapons can help supress berserking pawns.

Artificial body parts can be used while holding a gun. Fulfilling the role of a sidearm, these implements are weaker than dedicated melee weapons. You can put these on your frontline gunners, who may not always be able to supress a swarm of melee combatants. When holding a melee weapon, these parts can slightly increase damage; due to the melee verb system, sometimes the fists / body parts will be used instead of a weapon.

Creating these bionics is an advanced technology, so they are usually reserved for the mid- to late- game. Body parts can also be bought, though the surgery can be a bottleneck if you don't have a good doctor. Also note that pawns will prioritize their "best" melee attack; only one part is required for gunners.

are stronger than elbow blades

, which are stronger than a knee spike

are the weakest of the bunch, but do not occupy any useful area of the body. 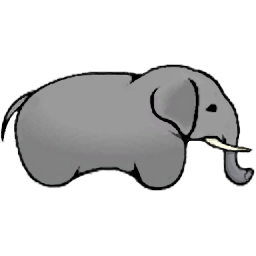 Animals are much more expendible than a colonist, and most have a lot more health than a colonist. However, they cannot be drafted, limiting their combat use severely. In addition, they require one or multiple pawns proficient in the Animals skill in order be tamed and trained. They thus have 2 main uses:

Other than shooting an animal and hoping it attacks the raiders, there are three dedicated ways to make wild animals hostile to your enemies:

For the former two strategies, you should wall in doors (to prevent exit via mental break), and watch the carnage. Stronger animals like megasloths or a herd of elephants can easily end smaller raids, or at least force sieges to attack. These are heaily dependent on your map's current fauna. Also note that using wild animals like this becomes progressively weaker as raids become stronger. An elephant can't handle 30 gun-wielding raiders, for instance.

Mechanoids have all the advantages of being an animal and then some, including the ability to be drafted like a colonist. Mechs can be repaired of all damage for just the cost of power and can be resurrected for a couple of steel. This negates all the long-term problems that lategame melee faces (though mechs are, of course, not invincible).

Mechs have their unique costs. They require their mechanitor nearby to actually control. They cost bandwidth, which could have been used for any amount of ranged mechs. And they create toxic wastepacks, which will eventuallyy pollute your landscape. As combat mechs can be turned off, the actual costs of power and pollution are rather limited.

Scythers (2 bandwidth) are the strongest and most effective at melee, and move slightly faster than a baseline human. Tunnelers (3 bandwidth) have twice the armor of a scyther and a natural 250 HP shield belt, but are much slower and don't do as much damage. Tunnelers can also mine. Centipedes (4) and mechanoid commanders (5) have similar armor to the tunneler, and have much higher actual health, though are mainly used for ranged combat.

Neolithic weapons are the easiest weapons to craft, available for New Tribes and Naked Brutality starts to craft.

Bows are at least something to fight raiders without having to engage in melee. Even without a single melee fighter, 5 tribals with shortbows can easily repel raids. Focus fire on 1 target, and don't let melee enemies too close. Doors can help with early ranged tactics. For example - place 2 doors on opposite ends of a larger building, and when melee raiders get too close, go to the door on the other side.

Naked Brutality players will want to rely on spike traps to kill raiders at first, using the shortbow for hunting and to save on traps. Of course, new tribes (and other colonies) can also use traps to their advantage.

Due to its weaknesses and Smithing requirement, pila shouldn't be actively created or sought after. However, a Lost Tribe will start with one.

Flamebows are specialist weapons that cause fire.

Low-tech, conventional firearms. These weapons are often carried by early pirates and outlanders, such as the Scavenger Gunner, Pirate Gunner, and Town Guard. Scavenger gunners and pirate gunners in particular can only carry these weapons (and the incendiary launcher). These weapons will eventually be outclassed by superior firearms, like the heavy SMG and chain shotgun. So while you can craft these weapons as soon as you research Gunsmithing, many players like to wait to craft the weapons from Gas Operation and onwards, due to the large increase of effectiveness from the more advanced weapons.

Note that weapon quality has a large impact on combat. Even if you prefer revolvers, a poor autopistol will likely outperform an awful revolver, and a good recurve bow can outperform both (at maximum range). This applies to all weapons, but especially if you are reliant on obtaining weapons from raiders.

As the lowest tech firearms, pistols are weaker than most of the options here, but still better than a recurve bow at all ranges. Inaccurate from max range. They are roughly the same, but revolvers are better as a support weapon, and autopistols better as a main damage dealer.

These options are effective in any situation (outside of close combat), mostly due to the small effective range of these lower-tech weapons.

Due to enemy AI firing from the closest available cover, meaning they often fire from near-max range, both of these weapons perform very well in the open. Both weapons are good in a long distance firefight, though bolt-action rifles are statistically superior.

Pump shotguns are a specialist weapon, great at both support and close-range damage. Machine pistols are strong up close, but a good overall weapon (for its tech level).

Short ranged weapons are best used directly behind melee fighters, but remain decent at their maximum range. Like with melee, you can make hallways and tunnels so that you can gun enemies at an effective range. Counter these weapons by using a long range weapon, engaging them in melee, or luring them into spike traps before they get too close.

Ranged weapons unlocked from Gas Operation and onwards. Most, if not all, of these weapons have some sort of niche or viability even for late- and end- game colonies.

In general, these weapons are great for base defense, whenever in static setups or when dealing with breachers and sappers. They are also the best options for attacks outside of your base. Assault rifles are the overall best weapon outside of a kill, charge rifles deal the most damage of the three, and SMGs are best at lower skill.

Weapons with a large burst of bullets, but low accuracy and long cooldowns.

Both weapons are good as support, and for at mowing crowds of enemies. Missed shots can hit other enemies in the vicinity, meaning their low accuracy is compensated when attacking a horde of tribals. Both weapons do well in crowded, stationary setups. The minigun is much more extreme - its optimal DPS is miles above any weapon in the game, but the user becomes a sitting duck.

Chain shotguns are amazing when you can expect or force close combat. Infestations are inevitable for mountain bases, while any form of melee block works well for shotguns. These weapons can also work very well inside a specialized killbox; if you can control/expect where sappers and breachers will go, shotguns can be a very viable weapon as a colony's sole firearm.

Sniper rifles are great weapons for kiting stationary enemies and the best weapon for hunting. Fire a shot, and as enemies approach you, back off until they reset to their original position. They are also great at luring sieges to assault your colony, assuming the siege doesn't have snipers of their own.

Charge lances are very similar to assault rifles for overall usage, with same damage and range. As its DPS is lower, this weapon is not recommended to use over assault rifles, at least for most cases. It may have use in dealing with heavily armored enemies.

Grenades have the shortest range of any colonist weapon in the game, only thrown up to 12 tiles. All grenades have a forced miss radius.

Launchers have a greater range than grenades, but have a very long cooldown (2nd slowest in the game, just faster than the pila).

Weapons of mass destruction. Rocket launchers have a large warm-up and cooldown for the user. Targeters can be deployed quickly, but also takes some time to actually start the explosions. All of these are single use, and none can be crafted by a colony.

As these are all rare, single-use items, use them for when you can't handle a raid, such as an extra-nasty siege.

Mortars are not handheld weapons, but are weapons nonetheless.

Mortars are extremely useful against enemy sieges. Until they take enough of their own casualties, a siege will continue to lob their own mortar shells, which is devastating to any colony not under overhead mountain. They are great against other stationary opponents, such as crashed ship parts or mech clusters

Each mortar shell has its own purpose: