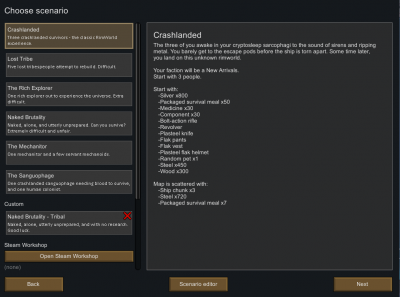 Default scenario choosing window, with all DLCs installed and one custom-set scenario.

The scenario system allows you to choose, randomize, and customize special situations to play in. Determine the starting situation, type of community (tribe, colony), permanent map conditions, starting items, animals, health conditions, traits, and change special rules. In the image on the right, you can see the window for choosing scenarios and the "Open Steam Workshop" button (if you are using the steam version of the game).

Starting scenarios can be roughly grouped into one of two types, determined by the faction type the player will inherit. These are:

There are some significant differences between the New Tribe and New Arrivals scenarios.

The most significant difference is the starting research and the long term effects on research speed. New Tribes begin with a different, and lower tech, set of research projects already completed, as described below. Note that custom and default scenarios may also add additional technologies to these lists.

These four scenarios are in the base game. Each offers a different set of challenges, and encourages different playstyles to a certain extent. For example: you could start off as a 'rich explorer' who came from a high-tech glitterworld but yearned to explore the universe, or you could also start as a desperate tribe that's on the brink of starvation after fleeing from a devastating group of 'blood machines'. On the other hand, you could be managing a few crashlanded civilians who barely escaped an assaulted passenger liner with their lives.

Here are the four scenarios listed in order as shown in game:

Summary: Three crashlanded survivors - the classic RimWorld experience.
Description: The three of you awake in your cryptosleep sarcophagi to the sound of sirens and ripping metal. You barely get to the escape pods before the ship is torn apart. Some time later, you land on this unknown rimworld.

Summary: Five lost tribespeople attempt to rebuild. Difficult.
Description: Your tribe was destroyed by the great blood machines sent by the gods. Five of you managed to escape. Now, it's time to build up a new home. Note: Since you'll start poor and research slowly, this is a difficult scenario.

Summary: One rich explorer out to experience the universe. Extra difficult.
Description: People called you crazy for leaving your glitterworld home, but you always yearned to explore the stars - outside the neurosimulator. Now you're at the end of your long journey in cryptosleep, landing on an unknown rimworld to see what it's like. Note: Since your starting character will lack some skills, this is an especially difficult scenario in the early game.

Summary: One mechanitor and a few servant mechanoids.
Description: You knew you could only achieve greatness with help. People were too unreliable, so you chose to take on mechanoids as your servants, workers, and warriors. As you gained strength, others became fearful. It became clear you needed to get away from the influence of humanity. Now you've migrated to this sparsely-populated rimworld with some of your metallic helpers. Finally, you have the space to grasp your true potential!

Note: Since your starting character will lack some skills, this is a difficult scenario.

Summary: One crashlanded sanguophage needing blood to survive, and one human colonist.
Description: When a dark stranger offered you a cure for your cancer, you were ready to agree to anything. He made you into a sanguophage - an immortal blood-drinker hated by a thousand religions. You hid your condition for years, but eventually a hunter tracked you down. Stowing away on the first starship leaving the system, you barely escaped alive.

Note: Sanguophages have unique strengths and weaknesses, which makes this a difficult scenario.

The scenario editor looks somewhat like the default scenario choosing window except for the left side of the page has changed, there are now three buttons: Load, which you can use to load your previously saved custom scenarios. Save, which is used to save your custom scenarios. And randomize seed, which is used to randomize the scenario. Under these buttons is the Edit mode, which you can toggle to open a window like the one on the bottom-right.

In this mode, you can change a scenario however you want. Each of the parts on the right of the window is explained below, including the possible inputs.

These parts are self explanatory and require no input: Cannot mine, cannot sow, cannot tame and cannot hunt.