Pollution refers to toxic pollution, largely as the byproduct of recharging friendly mechanoids. Even using a wood-fired generator or chemfuel generator won't create it, for instance. 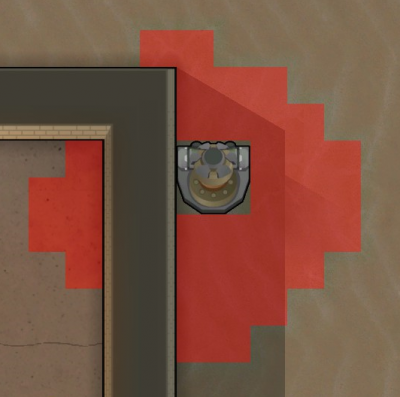 Ground pollution generated by a toxifier generator, visualized by the pollution overlay. The tiles under the player-built walls are polluted, though this does not show on the overlay.

Pollution spreads in an expanding circle. Natural rock walls block pollution spread, but player-made walls and structures do not.

Defoliator ships will also pollute an expanding circle of tiles when landing, centered on the ship. This is in addition to the actual defoliation; the additional pollution spreads much slower.

On the World Map

Dumping wastepacks on a hex utilizing caravans or transport pods will increase the pollution percentage of the hex by 0.05% per Wastepack dumped, or 1.3% per full transport pod. Once a world map hex reaches 100% pollution, any additional pollution gain will instead happen to one of its 8 possible neighboring tiles- this can spread pollution to the player's colony if one is not careful.

Dumping wastepacks within 15 tiles of another faction settlement will cause the player to take a relationship penalty, scaling up with the number of wastepacks dumped and proximity to the settlement. Outlander and pirate factions may send a drop pod of waste back at you, while hostile factions can raid you.

Pollution may also exist from world generation, where certain tiles will be heavily polluted. You can configure the pollution coverage, with 5% as a default.

Pollution takes the form of polluted tiles. Polluted soil has a fertility of 50%, regardless of the soil's original quality, and can only grow a limited number of plants: Toxipotatoes, grey pine, deadbarrow cactus, devilstrand, and psychoid. Colonists will also recieve toxic buildup from these tiles.[Detail Needed] Having polluted tiles increases the map's overall pollution, which causes a number of effects.

Pollution on the ground can be turned back into toxic wastepacks with a pollution pump, or by ordering colonists to clean it up.

If there is enough pollution present within 4 tiles of your world tile, a weather effect known as Acidic smog will occur. How often depends on the level of pollution present. Tiles 2-4 spaces away have a 0.5x multiplier to pollution.

Originally engineered as anti-mechanoid bioweapons, Giant insects are drawn to pollution. When polluted terrain is present, there's a chance for insectoid cocoons to emerge from the ground. These coccoons will hatch if a pawn comes within a small radius of it.

Insects and humans with the Pollution Stimulus gene are stimulated by the toxic fumes of polluted terrain, making them faster and deadlier.

Note that the former two ways of cleaning pollution up only turn it into toxic wastepacks, which then need to be dealt with somehow.