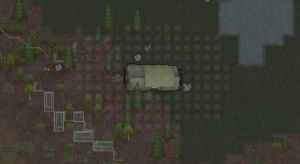 A 14x9-tile rectangle, with an extra 1x6-tile row along the top and bottom of the ship part and an extra 1x3 column along each side, should be left clear. Placing any item or structure within this radius - such as a wall, sandbag or spike trap - will open the ship as if it had been fired upon. Objects placed or built outside of this radius will not affect it, allowing the player to build defenses prior to opening the ship. Since the threat is not immediate, players can build defenses surrounding the ship part. IEDs and spike traps can also be placed around the ship to instantly damage any mechanoids that emerge.

Because of defending mechanoids' tendency to stay near the ship part, pawns equipped with sniper rifles can "kite" the defenders from a safe distance. This is done by advancing to fire at mechs around the ship part, retreating before they come close enough to shoot back, and advancing again once they return to the ship part. This is particularly effective against the slow-moving centipedes, whose firing range of 27 tiles pales in comparison to the 44.9 tile range of sniper rifles.

A mysterious crashed piece of a spaceship. It may contain exotic materials, computers, even AI personas. This kind of technology can be dangerous

This ship part contains a hostile AI persona core that emits a psychic drone that negatively affects the mood of all humans on the map. This drone begins low, but grows progressively stronger the longer the ship part remains, therefore it is advisable to destroy the part as quickly as possible. A colonist's psychic sensitivity traits may worsen or lessen the effect of the drone.

The AI is also capable of emitting concentrated bursts of psychic energy, driving one colonist to an immediate mental break, or a localized blast that drives all animals in the immediate vicinity insane.

A mysterious crashed piece of a spaceship. It may contain exotic materials, computers, even AI personas. This one seems to be poisoning the ground around it.

Relatively harmless compared to the psychic ship, this ship part slowly poisons an expanding radius of ground around it, destroying any native flora and cultivated crops.

As of version 1.1, the ship is called a Defoliator Ship and has a maximum radius of 100 tiles. It no longer generates snow in the poisoned area. If colonists and animals are zoned away from the mechanoids' range, the Defoliator Ship can be safely ignored indefinitely. Waiting for passerby traders or raiders to engage the ship may be a viable strategy for colonies without access to stronger technologies such as mortars. However, the mechanoids must be woken up first by damaging the ship or building in the ship's vicinity.