A pair of high-explosive shells connected to a trigger which detonates on touch or bullet impact. Since it is hidden in the surrounding terrain, it cannot be placed adjacent to other traps. Animals can sense these when calm.

They explode in a 3.9-tile radius, 0.25 seconds after being triggered, dealing 50 Bomb damage, having a fair chance to incapacitate and a small chance to kill a pawn.

IED traps can be constructed once the IEDs research project has been completed. They require

They are triggered by enemies walking on them, but also by colonists or friends, tame or wild animals, or even by gunshots or explosions. When tripped, they will start emitting a hissing sound hinting enemies to run away, and because of the delay, single placings may prove useless but chained each other within blast radius can guarantee effectiveness at an expensive cost.

It is inadvisable to place them in the open, as manhunting animals could trigger them. Colonists, friendlies and sane animals are aware of placed traps and will walk around them, but only if another short route is available. Pawns will not be able to avoid traps placed in a long continuous line, or in choke points like a narrow hallway. A trap is less likely to be triggered by a colonist or friendly (0.4% chance).

Placement requires some forethought by guessing positions where the enemies will be stuck for a couple of seconds such as cover spots (rocks or walls) and choke points on the side where enemies would take cover when engaging your colonists. Example: an IED trap surrounded by a tile or two of sandbags will explode while victims are still close due to the reduced movement speed to walk out over them.

IED traps can be triggered by shooting at them, so they can be placed near other high-explosive shells to make a bigger explosion, to destroy crashed ship parts for example. 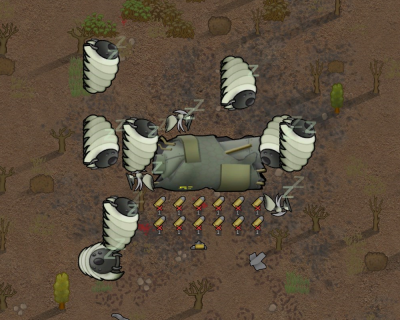 Here, a dozen of high-explosive shells are placed near a defoliator ship (1200 HP), along with an IED trap.

It requires a bit of micro-management to place individual stacks of shells (make the shell at a machining table, carry it to a 1×1 stockpile zone, delete this zone to avoid having more shells on it, repeat), and a careful placement of the trap (placing it too close to a mecha will wake it up), but the explosion will destroy the defoliator outright. The pawn shooting at the IED trap should be ready to run very fast, or better: wear a jump pack

to avoid being sliced up by the waking mechas.

Unfortunately, a stack of 12 shells doesn't make the same damage as 12 stacks of one, so individual stacks have to be made (in fact, a stack of 25 shells exploding brings the defoliator to 725/1200, not even half the damage for more than twice the amount of shells).

This technique works well to destroy ship parts, or possibly sleeping scythers that accompany it, but killing centipedes would require much more shells and is clearly not the best method: kiting them is much easier.

Since the IED deals bomb damage, building a large roof supported by a single wooden wall within range of an IED can cause a roof collapse when the IED is triggered, which can deal additional damage in a much larger area for a low additional cost.