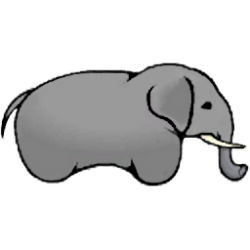 The largest unmodified land animal. Elephants has a long trunk they use to manipulate objects, and sharp tusks they use to gore attackers. A dead elephant's valuable tusks can be recovered by butchering it.
Intelligent creatures with complex social relationships, elephants can be used as pack animals or trained to carry out the most complex of tasks. They live a long time, and are known to remember events and relationships from many decades before.

Elephants are large land animals often found in tropical rainforests, tropical swamps, and arid shrublands. They have two elephant tusks which give both genders of elephant dangerous attacks in melee, and which can be harvested from adult male elephants for trade or use by humans as a modest melee weapon. Butchering female or non-adult elephants does not yield any tusks. It is currently unclear whether the ability for female elephants to attack with tusks, but not yield them on butchering is intentional or a bug.

They are relatively hard to tame, with a wildness of 75 percent, but once tamed, they can be trained in high level animal skills due to their intelligence. It can be employed in the animal melee blocking tactic because of their tankiness and high damage output. Elephants can be brought on caravans as pack animals, they can carry 140 kg of weight, which is four times more than the alpaca and almost double that of the muffalo.

Elephants are in the unique position of being the only pack animal that can also be trained to haul. They can even be ridden in caravans for a 1.3 overland speed multiplier, for longer-range trade and travel.

Elephants are a good choice as a damage soak animal, as the amount of damage they can take is joint second with megasloths, although this comes at the cost of a very high hunger rate.

Female elephants don't drop tusks when butchered, despite being able to make tusk attacks in melee and displaying the tusks on their texture. If it is intended for female elephants to not have tusks, this may imply that the elephants in-game are Asian Elephants as tusks aren't a sexually dimorphic trait in African Elephants.