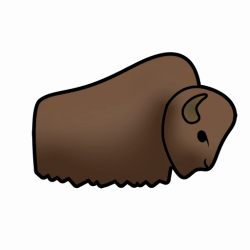 A large plant eating mammal appearing in the savannah wilderness. Tamed are quite docile, but enraged are fast and dangerous.

Bison are slow-moving, grass-grazing quadrupeds analogous to buffalo. When enraged, they can melee and can become a threat to colonists due to their high health.

A bison will also increase the carrying capacity of any caravan it's part of by 84 kg, making them an excellent pack animal.

Bison can be found in temperate forests and arid shrublands. They can either be tamed by a Handler or self-tame in a random event.

Bison can be bought and sold in other faction bases and from bulk goods traders. Bison purchased from traders will be already tamed.

Bison can be sheared by animal handlers once every 15 days, giving

120 pieces of bison wool worth

They provide a large quantity of leather compared to other creatures that spawn in the same biomes. Killing two or three bison usually provides enough leather (or wool if you are willing to tame them) to make a parka as well as a generous amount of meat.

Bison stats are essentially equivalent to muffalo except they have a slightly higher market value and movement speed, and give plainleather instead of bluefur. When tamed they give bison wool instead of muffalo wool, which is largely the same but has an inferior cold insulation - offering an insulation factor of +26 °C (46.8 °F) instead of +28 °C (50.4 °F). See Textile Comparison Table for further details.