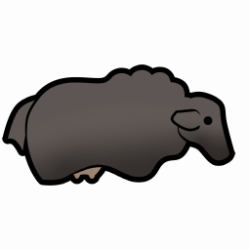 Yaks are robust cattle with a bulky frame, short but thick legs, and rounded cloven hooves that are splayed to help them walk in snow.

Yaks are tameable herbivores with a medium movement speed. A Yak will increase the carrying capacity of any caravan it's part of by 73.5 kg. Yak's are one of the easiest pack animals to tame. Males of the species can be distinguished by their horns and lack of udders, while females have the opposite.

Yaks can be found in temperate forests, temperate swamps, boreal forests, and cold bogs. They can either be tamed by a handler or self-tame in a random event.

Yaks can be bought and sold in other faction bases and from bulk goods traders. Yaks purchased from traders will be already tamed.

Handlers are required to harvest resources from animals.

Female yaks can be milked once a day, producing 11 milk.

Note that while cows are faster milk producers, yaks produce milk AND are pack animals, which is a combo that muffalos no longer provide. Dromedaries are more direct competitive and choosing between them is more of a matter of preference. They are both pack animals that produce milk but yaks produce 22% more milk on average, while dromedaries allow riders to speed up caravans. They are otherwise very similar - carrying the same load and eating the same amount.

See Animal Products for more details on how much each type of animal produces. See Pack animal for more comparisons on pack animals.

12.79 milk per day per nutrition consumed, more than than either dromedaries and goats.