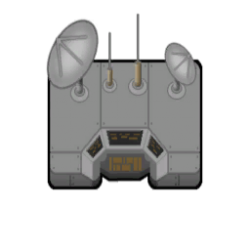 Allows radio contact with other factions and orbital traders.

A comms console is used to trade with passing orbital trader vessels and communicate with other factions.

Comms consoles can be constructed once the Microelectronics research project has been completed. They require

Ordering a colonist to use the console via right-clicking it will bring up a menu showing the available factions or trade ships. Selecting an option will send the pawn to the console. Once the colonist reaches the console, the selected contact will be activated. Pawns that are incapable of Social will not be able to call anyone.

Despite being depicted with satellite dishes, a comms console can and should be placed under a roof. Unroofed comms consoles will short-circuit during rain or snow.

Trade ships randomly appear as part of an event. You will be automatically notified when a trade ship appears if a comms console is powered (ships can still arrive unannounced during a solar flare, for example). In any case, the ship leaves in 16 hours, or 40,000 ticks (11.11 mins), after arrival.

A powered orbital trade beacon is required to initate trade, and items must be placed in a beacon's radius to be traded. While it may seem logical that a passing orbital trader could be contacted from any colony with a comms console, the game does not work like that. Any orbital trade notification is tied to a specific colony, and only that colony has the option to trade with them.

Trade ships from the Empire

will only appear if a colonist holds the title of Baron or higher.

At a comms console, you can call on any human faction to ask for the following:

Due to unsafe weather conditions, it may be impossible to call on an ally. This is mainly from temperature, making it more difficult for colonies in extreme hot or cold biomes to rely upon their allies. 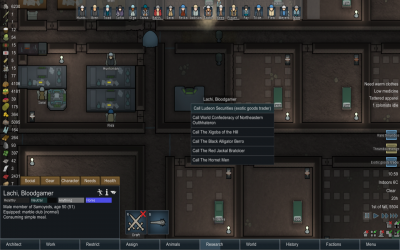 Uses of the comms console in the Biotech DLC.

A mechanitor can use a powered comms console to summon a diabolus, which will eventually arrive at your colony. This has a cooldown of 2 days and does not consume the building.

Trade ships are an uncommon, but vast source of buyable materials, from steel and plasteel to components to neutroamine, without having to create a caravan. These types of materials can impede a colony's advancement. The further away neutral faction bases are, the more useful trade ships become. As Microelectronics is also required for a hi-tech research bench and further advancements in research, the comms console is both useful and convenient to build. Of course, a means of making money is almost required to actually buy things from trade ships.

Requesting a friendly caravan allows you to pick a trader type of choice immediately, great when you need specific items. However, this (and military aid) requires an allied faction to begin with. Outlanders are preferred allies for trade due to their higher tech level, and thus higher tech items on offer.

It cannot be uninstalled, only deconstructed, so plan before you place it.