An orbital trade beacon is a miscellaneous structure that allows items stored within its range to be used for trading with orbital traders.

Orbital trade beacons can be constructed once the Microelectronics research project has been completed. They require 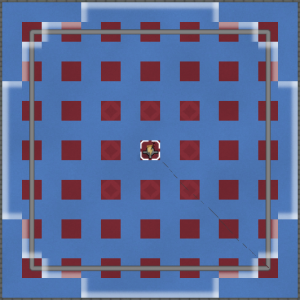 Powered orbital trade beacons are required to engage in orbital trade. A comms console is required to find and contact trade ships. Beacons can be used to pay factions for ransom or persona core information. All silver and other tradeable items within a beacon's radius are available to offer. Animals don't need to be within the beacon's radius to be traded away.

Trade beacons will work both when outdoors and under a roof, and do not need to be placed in range of a comms console. Solid walls will break the area of influence of a trade beacon, but columns and other passible objects don't bloock it. Items purchased from a trader will be dropped within range of a beacon if unroofed, otherwise they will be dropped as close to the beacon as possible, avoiding the roofs.

40% of center drop pod raids will target a powered, unroofed orbital trade beacon if one is present, but will default to regular behavior otherwise.

Orbital trade is a significant resource that should be exploited. For ease of use, it may be best to place your stockpiles with beacons in mind - shaping them such that places are left for the beacons and the beacons cover at the very least anything that will likely be sold, if not everything in storage.

Orbital trade beacons can be used to exploit the spawning behavior of drop pod raiders. By building a beacon outside of your base, a percentage of drop pod raiders will be spawned there outside your defenses instead of in the middle of your base. This can be further exploited by placing defenses such as IED traps around the landing site. Note that received trade goods will still be sent to this "bait" beacon, so it must still be safely accessible to colonists. Alternatively, the bait beacon can be powered off just before receiving trade goods and then switched back for daily operation, ensuring that the goods will land in a safe place inside your base. However, the player should decide if this is worth it as this causes additional micromanagement during already time-sensitive orbital trades.