Produces electricity from a river. Must be placed with its wheel in moving water. If watermills are placed too close together, the turbulence they generate will interfere and reduce power generation.

Watermill generators are built on moving water to generate constant power, regardless of weather or other conditions.

Watermill generators produce a constant 1100 W of power after being constructed.

The watermill generator is unique in that it requires two different types of terrain: heavy terrain (i.e. solid ground, not mud or gravel) and moving water. This includes rivers and creeks, but not ocean.

The base is a 3x3 square in the middle of the housing (in white); the housing extends another 1 square beyond that, making a 5x5 square. Then, a the 1x5 waterwheel is attached to one side of the housing, making the total footprint 5x6. Only the 3x3 base must be on firm ground.

A watermill generator must be placed:

Watermills have an exclusion zone. They are 13x7 rectangles, extending 4 squares above, below and outside the mill. The output of watermills will be reduced to 30% (330W) if you overlap their exclusion zones. Water inside this zone has no effect - bridges, walls, and land inside an exclusion zone do not interfere with power generation.

When placing the watermill generator, the blueprint will show: 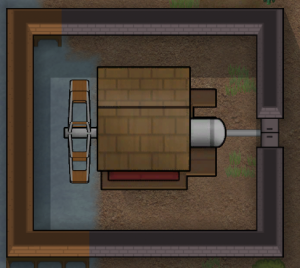 Despite being surrounded by wood walls, this watermill gives 100% power and is reasonably safe. Raiders will rarely, if ever, target this.

Watermill generators offer 100% consistent power, without maintenance, while being cheaper to obtain and research than geothermal generators. Therefore, watermills are a great source of power. Their main problem is map limitation, requiring a river or creek to build off of. And as efficient watermills need to be spread out, they are slightly harder to defend than other power systems.

In practice, watermills can be defended by surrounding them in walls. Most raiders will not target anything enclosed in walls/doors, if they have another target (colonist, targetable animal, or building) that is accessible without breaking a wall. Sappers and breachers will only break walls if it would be in their way. As these generators are created over water, it is unlikely for them to willingly pass through. Therefore, even wooden walls, hoisted over bridges, are sufficient to protect a watermill generator for the majority of cases.

The -70% exclusion zone reduction does not stack. Given a sufficicently straight river, the maximum power output would be to cram as many watermill generators along both sides of a river bank. However, building 3 watermills would give 90% the power of a single mill, and 4 would only give 120% power of a single one. It would take a very cooperative, straight section of river, and at least 8 watermills, 4 on each side, all side by side, to start to rival the 2,200W output of just 2 well-spaced watermills (and in just over the space required by 2).