Difference between revisions of "Revolver"

An ancient pattern double-action revolver. It's not very powerful, but has a decent range for a pistol and is quick on the draw.

The revolver is a light, single-shot firearm in RimWorld which deals a moderate amount of damage per shot, has a short time between shots, a moderate range and moderate overall accuracy.

Revolvers can be purchased from outlander and orbital combat suppliers, outlander settlements, or obtained from the following raider kinds:

Revolvers can also be crafted at a machining table once the gunsmithing research has been completed; from 30 steel, 2 components and 4,000 ticks (1.11 mins) of work. A crafting skill of at least 3 is required.

A revolver is also one of the three starting weapons in the standard crashlanded scenario, along with a bolt-action rifle and plasteel knife.

The revolver has a fairly good damage output for a single-shot weapon, only slightly trailing the autopistol in this aspect. Thanks to its fairly short time between shots and its good close-up accuracy, the revolver's a good weapon for low-skilled shooters. It also has a high enough stopping power to stagger advancing humans or human-sized mechanoids. The revolver is also very easy to acquire because earlygame raiders often use it, and because of its low manufacturing costs and technology requirements.

However, like the autopistol (though to a lesser extent), the revolver isn't particularly suited to medium-range engagements despite having the range to do so due to its fairly poor accuracy at those distances; even the recurve bow can keep up in those engagements, while the greatbow and bolt-action rifle easily surpass it.

The revolver is best suited as a close-quarters weapon overall owing to its accuracy profile, although it can be used as a support weapon to slow down enemies that are attempting to close distance (melee units, shotgunners etc.). This weapon's also a somewhat viable hunting weapon for lower-risk game, but the bolt-action rifle will still net better results.

Overall, the revolver is best paired with a careful shooter up to the equivalent of a level 21, then with a trigger-happy shooter beyond that point.

This section goes over how well the revolver fares against comparable weapons (similar value, tech level or similar characteristics) in 1 vs. 1 combat.

Results in the tables below are the percentages of battles that revolvers either won or tied against the weapon listed in the first column of said tables, with a sample size of 2,000 battles per result. Higher percentages are better.

The graphs assume a normal quality revolver against an adult human that's out in the open in clear weather. For DPS, projectile speed has also been factored into the equation, with the weighting based on the base amount of attacks that it'll take to put the aforementioned target into pain shock. 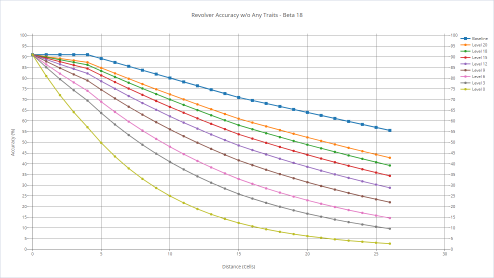 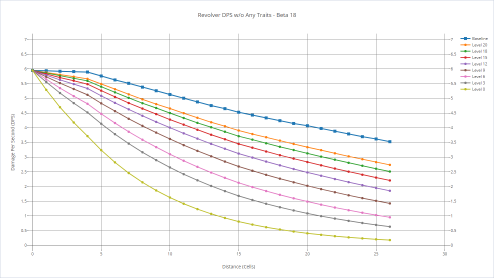 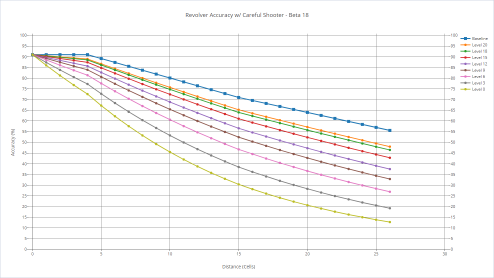 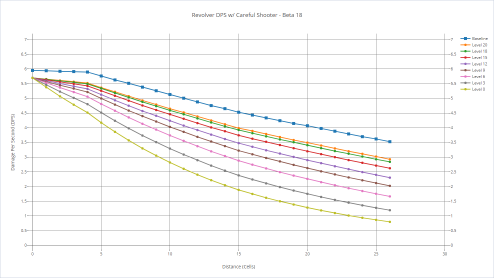 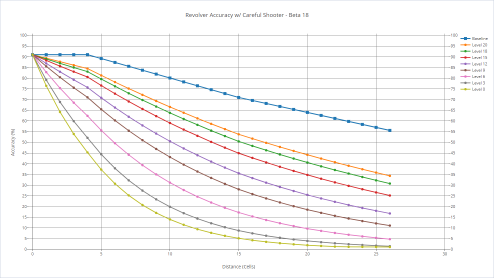 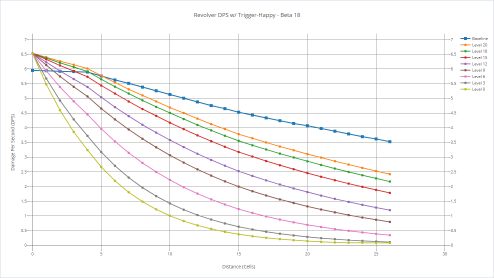 It received a slight accuracy and damage buff in 1.0.