The Greatbow is a moderately heavy, single-shot ranged weapon in RimWorld which deals a slightly higher amount of damage per shot; slightly longer time between shots; slightly longer range and high overall accuracy.

Greatbows are the most powerful overall neolithic-tier ranged weapons in the game, slightly beating the recurve bow in terms of range and damage, and handily beating the other options in its class. Accuracy at short and medium distances is also very good, as well as stopping power which is high enough not only to stagger humans, but also slightly larger targets such as cougars and all insectoids. Damage output is high enough that the greatbow can even compete with basic firearms such as the autopistol and revolver at short-to-medium distances.

Interestingly, the greatbow has a shorter cooldown than the short bow and recurve bow, as well as a longer warmup than cooldown, which is reversed compared to the aforementioned bows.

Close-up accuracy is worse than the other bows though, with close DPS only being on par with the recurve bow's. This weapon's also less skill-friendly than the other bow variants due to the aforementioned close-up accuracy as well as a longer warmup/cooldown cycle. The greatbow also surprisingly has the second-lowest armor penetration out of all neolithic-tier ranged weapons; even the short bow has better AP - the greatbow's DPS makes up for this though.

Mass is also higher than most other neolithic-tier ranged weapons (similar to many rifle-class firearms), with only the pila having an even higher mass. However, the greatbow's mass is still low enough that it generally won't have an adverse effect on a colonist's caravanning capabilities.

Against an unarmored human, a greatbow can kill with 3 hits to the torso, 2 hits to the head or neck, or 1 hit to the brain; cripple or destroy limbs in 2 hits; and destroy eyes and digits with a single hit. It'll generally take around 4 hits (~18.6 seconds average) to incapacitate that human from pain shock.

Overall, the greatbow is best paired with a careful shooter up to level 11, and with a trigger-happy shooter beyond that point.

Great bows can be purchased from neolithic war merchants and orbital combat suppliers, or obtained from the following raider kinds:

Great bows can also be manufactured at any smithy once the greatbow research has been completed; from 50 wood and 9,000 ticks (2.5 mins) of work. A crafting level of at least 6 is required.

This section goes over how well the greatbow fares against comparable weapons (similar value, tech level or similar characteristics) in 1 vs. 1 combat.

Results in the tables below are the percentages of battles that greatbow either won or tied against the weapon listed in the first column of said tables, with a sample size of 2,000 battles per result. Higher percentages are better.

The graphs assume a normal quality greatbow against an adult human that's out in the open in clear weather. For DPS, projectile speed has also been factored into the equation, with the weighting based on the base amount of attacks that it'll take to put the aforementioned target into pain shock. 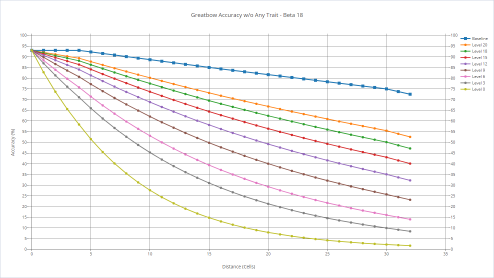 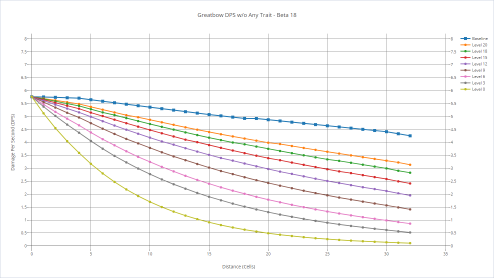 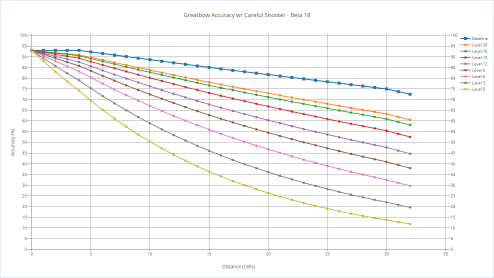 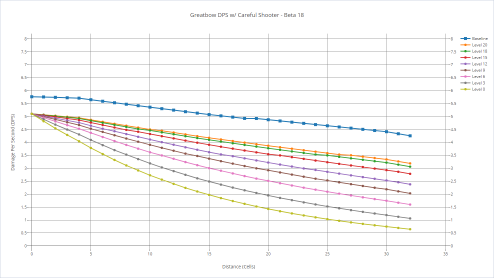 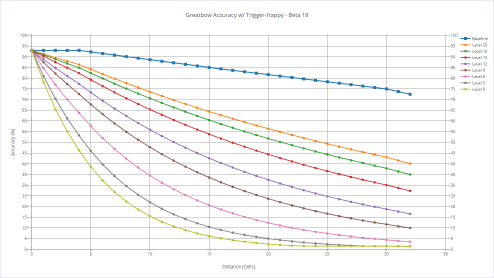 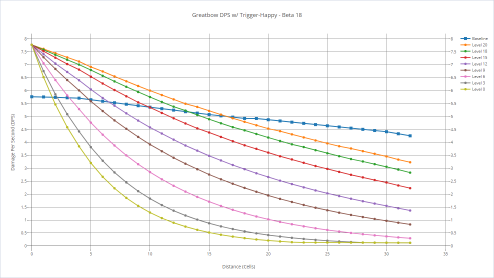