From RimWorld Wiki
Jump to navigation Jump to search
For a more in-depth guide to farming and producing food, see Food production.
For information on hunger, see Saturation.

Food is the basic source of nutrition to both humans and animals. Consuming food provides saturation. Deprivation of food leads to malnutrition and, if prolonged, death.

For a list of raw food items, see Raw food. 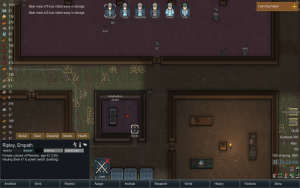 Food will be destroyed if left unattended (except for beer) by two factors: exposure and temperature.

Note that spoiling food and item deterioration are separate mechanics. For example: a raider is killed and drops a fine meal outdoors when the temperature is below freezing. That meal will still deteriorate, and eventually disappear when its HP reaches 0, even though it will get no closer to spoiling. Conversely, a meal stored inside a stockpile at room temperature will spoil rather than deteriorating.

Once spoiled, food will vanish and can never be recovered. However, food can be eaten at any stage before spoiling with no negative effect. Food poisoning comes from other sources, such as a messy kitchen or unskilled cook.