Ice sheets are the coldest option of cold maps. They have very little animal life and no plants. In fact, you should not expect to find anything more than five snowhares in your start. You should also not expect to see more than one new snowhare every week and one new polar bear per month.

In addition to that, they do not have any soil available, if you wanna grow something you would be doing it in stony patches around hills and mountains. But you can not, because it is too cold outside. You will struggle a lot until you get a heater and a sun lamp, then you can plant something indoors.

Even the warmest ice sheet it really cold. Their average varies from -20 °C (-4 °F) to -40 °C (-40 °F) and they never have growing periods due to the temperature. You still need to eventually make a freezer though, because the summer temperature is hot enough to spoil your food. You should expect to have problems with hypothermia during fall, winter, spring and during cold snaps in summers. 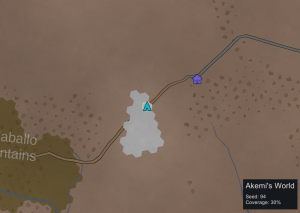 In all maps you should choose carefully your landing site to increases your resources available. Landing in the wrong spot does not just make your start harder, but also makes your mid-late game frustrating, as it severely limits you from using the whole caravan and quest system. You want to build a colony in an area with some of the following characteristics:

Ice sheets do not have roads or rivers, but that does not mean you can not settle close to tundra with a road. While you should not be surrounded by mountains, the landing site itself can be mountainous.

Ice sheet is so harsh that you will have to resort to cannibalism, so you wanna have a crew that can tolerate that. That means having one butcher that does not mind butchering people and everyone less vulnerable to mental breaks.

Here we add recommendations of traits and traits to avoid, but not following it does not change the guide, it just makes your game harder.

Your butcher should ideally be either Cannibal, Bloodlust or Psychopath.

And your crew should ideally not be Too Smart, Volatile, Nervous, Very Neurotic, Neurotic, Greedy, Jealous, Depressive or Pessimist.

As long as you got a proper butcher and your colonists do not break easily you should be fine.

Once you choose your landing site and colonists you should also choose your base area. It is important to notice that this area does not need to be final, it is just the area where you are more likely to survive the early game.

You want to find an area with the characteristics: near steam geysers, near steel, more growing areas and more easily defendable.

More growing areas means more stony patches and more easily defendable area is an area with few entrances where you gonna lay down your traps. Your priority is steam geysers. You have to make the base on top of a steam geyser, otherwise you will die of hypothermia very fast. 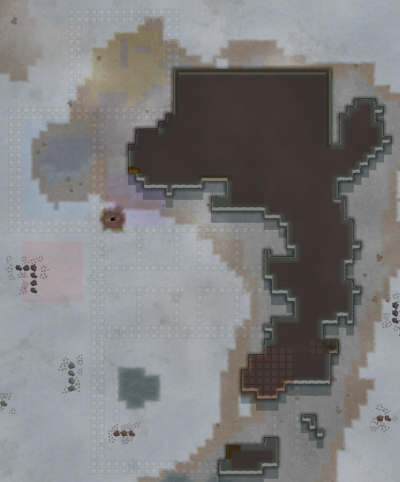 Good starting area near the geyser.

Now you gonna be struggling for food for a long time. If you have caves in your map, it will help a lot. You wanna keep the insects alive, so make sure to seal off the caves so that they do not freeze during winter and the hive does not dies due to lack of maintenance. Then go steal their insect jelly while they sleep.

Enjoy while it is warm and go visit your nearby friendly base to trade whatever you can for food. For that, you gotta get something you can trade:

Regardless, you still will not have enough food for five people for so long, you simply have to get rid of some of them. The best way is to put some of them inside the ancient cryptosleep caskets. 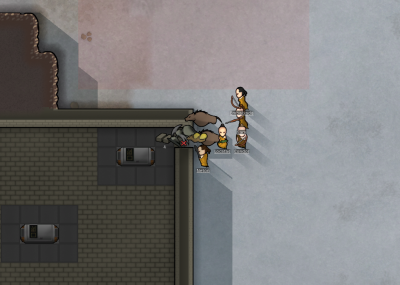 You can also send some people out while it is warm to raid the some base outside the ice sheet, try to not raid your closest friendly neighbor. Hunt the animals and harvest the plants around the base and run back to your base. You can make peace with them later. You have to bring the colonists back in the beginning of next season before it gets too cold.

But you gotta do something, feeding five people will not happen. Three people is about what you can you feed. 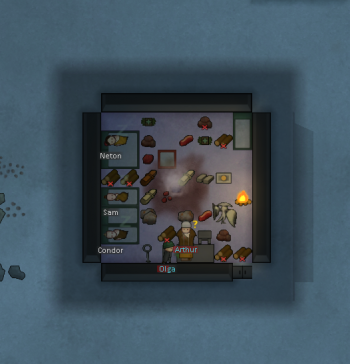 Base on top of geyser. Two colonists were sent on a raid mission.

Now the cannibalism starts, you will eat anyone that is not one of your starting colonists or from a friendly faction. That includes anyone who tries to join your colony, that also means offering help to refugees just so you can eat them later. Unless if you managed to lose most of your colonists and is now desperate for more people that is. You also better be sure you got clothes before fall starts.

You will not have time to make your own clothes, you will have to use the raiders tainted clothes. Try to get some of them alive, drop them near your base, strip them and kill them. That way, their clothes will not be tainted. But you should also buy cloth to ensure everyone has a parka and a tuque. 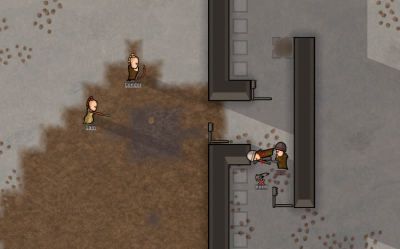 Since you gonna often offer help to refugees, you better make a proper killbox with lots of deadfall traps. The fighting starts outside though, with all the ice and snow the raiders gonna be really slow. Shot them while they are approaching because it takes a while for them to move to cover. Then once they are in cover, go back to your killbox. 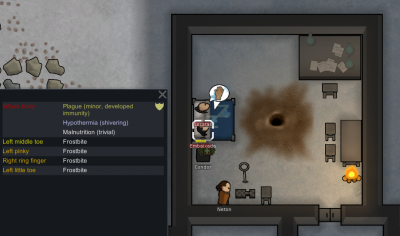 Colonists sent to raid mission barely came back before freezing.

Once you have your colonists with parkas and tuques you should take every opportunity available to go to another map. They will not happen often, but are a nice addition to your raider meat diet. Of course you gotta be able to reach there, which is why we recommended not landing in an area surrounded by mountains. If you placed your colony near tundra, then quests will often appear in tundra maps and they will have much more resources than your frozen home. But do not ignore quests outside it, since quests in ice sheet still have lots of resources worth taking. 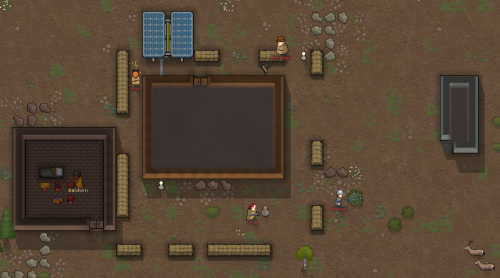 Look at all those delicious-looking animals and people.

Whenever you reach a tundra quest location, you wanna look for berries, healroot, animals and wood. Animals should be butchered before leaving, if the meat is too heavy and you still have time, you can use the local wood to make lots of campfires and turn all into simple meals to reduce weight. In ice sheet, just focus on hunting and butchering animals, getting human meat and looting anything that you can later trade for food.

Winter is coming, it is gonna so cold that not any parka will do. Anything with worse insulation than cloth should be replaced by cloth. Cloth is average in insulation but really cheap to buy. 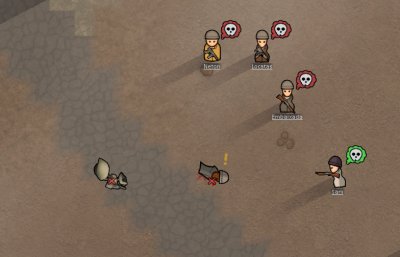 Now it is cold, so cold that even cloth parkas are not enough.

Likewise, now you should only send people out on quests if you got a strong insulating parka for them.

Raiders are now more numerous and if you keep doing quests you should have enough food to feed five people. 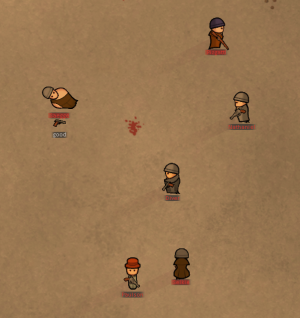 So so cold... that raiders might freeze before start attacking.

Winter is gone and summer is coming, you should get ready to make a freezer so your food will not spoil.

Finally you are ready to make a greenhouse and plant potatoes. Ideally, try to connect your greenhouse to your steam geyser.

Since you got a reliable food source, you can now accept more people. You are not free of cannibalism yet, but you can stop offering help to refugees and stop going to quests just to get more food. 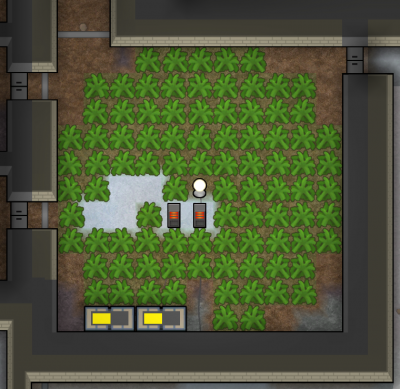 With hydroponics basins you may make greenhouses without having to stick to stony patches. Getting anything planted here is expensive, so you should make a nutrient paste dispenser to save on food, once you got one you may stop doing cannibalism. 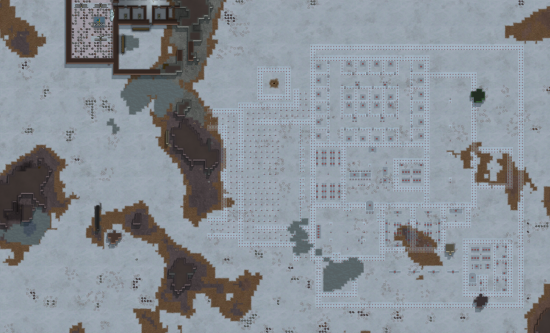 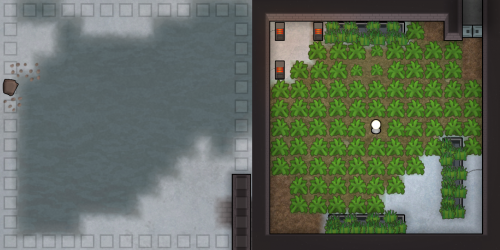 Before a pound (left) and later a greenhouse (right).
Guides