From RimWorld Wiki
Jump to navigation Jump to search
For rocks and ores, see Rock.

A chunk of rock. Can be cut into usable stone blocks.

A rock chunk is the general term for is any of the five types of stone chunk namely granite chunk, limestone chunk, marble chunk, sandstone chunk or slate chunk. Each chunk can be cut at the stonecutter's table to yield 20 stone blocks of the same kind. This takes 1,600 ticks (26.67 secs) of work. Rock chunks cannot be sold without first being turned into blocks.

Rock chunks can either found throughout the world naturally or spawned by the player.

Infinite chunks can also be spawned from a deep drill in an area that contains no underground resources. The type of chunk produced will be displayed on the deep drill's tooltip. It can be beneficial to place the drill right next to the stonecutter's table to remove the need for hauling, but this does risk the stonecutter being attacked by the insectoids that the drill can occasionally spawn, in addition to the drill operator.

Stone chunks will not be moved automatically, even from a home area, and must be manually designated by the player to be hauled. They can be hauled to any stockpile with the appropriate settings, however dumping stockpile zones default settings include rock chunks.

Despite the objects made of the resultant stone blocks having different HP based on which stone type is used, all rock chunks have the same amount of HP. However, they do have different masses:

Thus, if stone chunks must be transported, such as when transporting stone to a colony in a biome with low stone supplies like Ice Sheets, it can be advantageous to chose Slate over other stone types, despite the inferior stats of the end product. Note that stone chunks weigh the same as the blocks they are cut into, so, barring fractional calculations to maximize pack animals' load, they are just as efficient to transport in either form. However, practically speaking, it may be advantageous to do the stonecutting at the colony where preexisting shelter, stonecutter's tables, tool cabinets, armchairs, light, food, beds, recreation and other production benefits can more easily be provided. If you do wish to create (some) stone blocks, it would be wise to take a pre-constructed stonecutter table with you, as it only weighs 20kg when minified, and you can bring it back when you're done.

Chunks provide decent cover (50% as opposed to a tree's 25% or sandbags' 55%). Together with the fact they are omnipresent on natural maps, they are useful in firefights and will be used by the AI. Considering they can be easily hauled, it is a good idea to remove them from places the enemy could use and form your own makeshift barricades with them - whether when attacking enemy settlements or defending against raiders.

can be beneficial for both positioning cover for yourself or to remove it from enemies, as well as an easy way to move chunks a short distance without tying up a hauler. It skips the nearest 5 rock chunks or Steel slag chunks to the target location. It is a level 1 psycast that costs 4% psyfocus and 14 points of neural heat.

This section is transcluded from Stonecutting maximization.

Stonecutting speed is controlled by the cutting pawn's General Labor Speed stat, which is determined by a pawn's stats and capacities rather than any skills. Thus, maximization is based on improving that stat and removing process inefficiencies rather than grinding for experience.

Sight decreases general labor speed at values below 100%, but offers no benefit above 100%.

Manipulation can be improved with bionic or archotech arms, or with drugs that improve Manipulation or Consciousness (as it directly affects Manipulation) such as Go-juice or Wake-up.

Global work speed is only improved by certain traits, such as Industrious or Neurotic, a Leader's Work Drive

, and the drug Wake-up, which stacks with the drug's manipulation improvement.

Care should be taken to avoid assigning stonecutting to pawns with damaged vision or manipulation or with traits such as Lazy unless they are otherwise unoccupied.

While being a specialist locks out many other work types and the quality increase is of no use for stonecutting, it can be useful to give to a dedicated stonecutter, to crafter pawns that will benefit and are temporarily seconded to stonecutting, or only temporarily to build up a stockpile of bricks before abandoning the role. A separate pawn as production specialist using the command and staying nearby will also improve rates and can be used independently or stack with the improvement from the cutter being a specialist.

Additionally, like many other production tasks, lack of light or excessive temperatures will negatively affect rates, and up to two tool cabinets will improve rates.

Using shelves placed directly adjacent to the crafting position will remove travel time to pick up new chunks for cutting, as described on that page, so long as:

If there are insufficient haulers, removing the shelves and instead positioning the cutting table next to the chunk stockpile is ideal.

Placing an armchair or other chair will not improve production rates, but will ensure that the pawn remains comfortable and happy while cutting. It's worth mentioning, with the Ideology DLC installed, slaves

are ideal as stone cutters as the task doesn't raise any of the pawns skills. The -15% work speed from slaves is offset by a lack of need for recreation and adding a circadian half-cycler

further increases efficiency by removing the need for sleep at the cost of -15% consciousness. 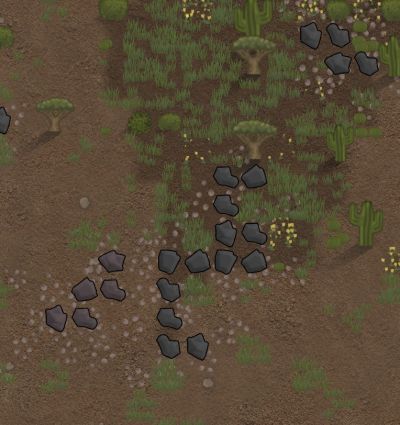 A collection of rock chunks in their natural habitat.