Colonists are the main protagonists in RimWorld. They are living inhabitants of each RimWorld colony, and the primary goal of the game is for the player to properly manage them. Each colonist has specific skills, positive and negative traits, and a character backstory. In general, every human is a colonist, except for raiders/travelers/prisoners. The colonists come in various outfits based on their background, which can be seen by looking at the 'Character' tab in game.

When managing the colonists, the player must take note of as many of the colonists' attributes as possible. These include, but are not limited to, managing their needs at all times, utilizing their skills to help with their progress throughout the game, increasing their skills, having them research technologies and build anything that helps them the most, and defend themselves against raiders - which include increasing their defenses with each passing moment.

When possible, playing into the strengths of each colonist, as well as their likes, will increase the player's efficiency of advancing through the game.

Upon creating a new colony, a screen where 3 colonists can be randomized individually is shown. The player cannot pick each character aspect by its own. Each of the colonists has a name, an age, a backstory, limitations, traits, and skills. The name is the only information that does not alter a colonist. The age can cause Cataracts, a bad back, Frailty, or other age-related conditions. Traits can cause mood disruption, psychic resistance, increase in skills, and so on. 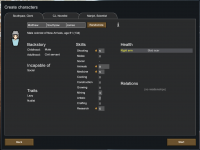 Each colonist has different skill levels generated at the start. They tend to range from zero to five, before accounting traits and backstories. Those numeric values are not fixed, but temporarily, and will increase as the character performs actions related to that area. Colonists can be passionate or very passionate about certain skills, and will gain them faster or much faster, respectively.

Older colonists tend to have better skills, but these are often offset by their poor health.

Each colonist will have one or two backstories, teenage characters will usually only have one due to their young age. Each story has a short description to go along with it, detailing a portion of the colonist's past. Each backstory has different effects on the colonist, such as increasing/decreasing stats and disallowing certain tasks. Such information is important to consider when creating the first colonists for the new colony. It may be difficult to even survive the start without certain skills, and future colonists may not join for a while.

There are 4 default scenarios, in addition to the ability to create/ download more. Each can have different attributes, e.g. no. of colonists, starting equipment, etc.

Colonists may be dropped in escape pods on the map or start off standing.

In addition to being clothed, equipment, supplies and materials will be dropped with or near the starting point, or scattered around the map, depending on the scenario.

Over the course of the game, other colonists can join, by walking onto the map from the border, falling in from their own pods via an event, be discovered in cryptosleep sarcophagi, captured and recruited or bought from slave traders.

Colonists can be equipped with various items, which are shown on their information panel while individually selected. They can only be equipped with one item type at a time, meaning a single shirt, a single weapon, and so on. Their skill with their weapons is determined by their skill with Shooting, for projectile-based weapons, and Melee for the rest. An example of this can be seen below.

Marine colonist equipped with a survival rifle from earlier versions

The work tab allows manually setting the tasks that each colonist is allowed to perform. Colonists will have a natural aptitude at a task, and have no check-boxes for tasks they are unable to perform.

You can also prioritize a colonist's actions manually. To do this, go to the Work tab, and check the Manual Priorities box in the upper left-hand corner. The colonist has the numbers 1-4 in each check-box available, with 1 being the highest priority. If two or more tasks have the same prioritization number, then the colonist will do tasks from left to right, in relation to the task menu.

The Thoughts tab shows what your colonist is thinking and experiencing, whether good or bad, and these thoughts will increase or decrease mood.

Colonists, and all human characters, have basic needs that, if not met or if met beyond expectations, will trigger thoughts which in turn will influence the pawn's mood.

The basic needs of human pawns

Any drug addictions a pawn has developed become needs for that pawn, and need to be satisfied like the need for food and rest. Failure to do so puts the pawn into withdrawal, which can be an extremely disrupting or even fatal situation.

After a person has successfully withdrawn from the drug, the need will disappear entirely.

The Needs window of a pawn 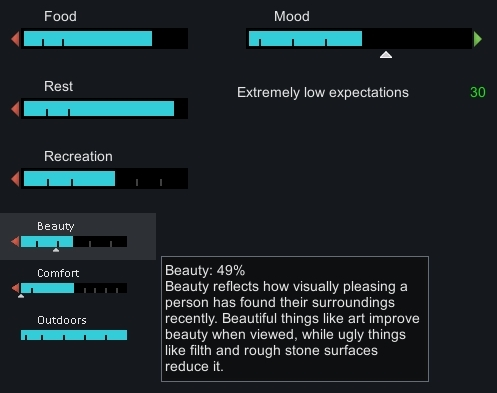 Example view of a colonist's needs window with the beauty level highlighted.

This window is shown if you select a colonist's needs tab. It can also be displayed for prisoners, guests and tame animals, but will display fewer statistics in some of these cases (eg. animals do not have beauty and comfort needs, and no thoughts at all).

You can mouse over the various meters to have the game give you more information in a tooltip. In the example, the beauty meter is currently selected, and the tooltip displays its current level ("49%") with some text detailing the meaning. Some of the meters display very detailed explanations when selected.

How to read the levels

The red and green triangles show the current tendencies of the meters: in this example, the mood level is growing, the outdoors level is not changing, and all the other levels are shrinking.

The white triangles show where the mood, beauty and comfort levels will settle if the current situation of the pawn does not change: the pawn from the example will have a little higher overall mood, somewhat lower beauty level, and zero comfort.

Since the white markers represent the current, immediate situation, their positions will change often, and not necessarily have a substantial impact on the need level.

The black hatch marks on the level meters represent the threshold points where the mood of the colonist will change because of a thought that would occur at that point. In the example, the beauty level is at 49%, right in the middle, but the white marker indicates that it will fall to somewhat below 35%, the position of the second hatch mark. This will then incur the thought "Unsightly environment" and a -5 mood penalty.

The hatch marks on the mood gauge show the thresholds for minor, major and extreme mental breaks. Mental breaks are not good...

This is confusing, I still don't understand...

The main aspect to focus on when looking at the needs window is the position of the white mood marker in relation to the current level of the mood bar. The mood bar will always try to catch up with the marker, and various thoughts will appear or disappear in the process, changing the mood of the colonist.

Do not get confused by the white marker seemingly always being in the "wrong position" – this is not true, because it actually does reflect the current situation of the colonist, while the meter level grows and shrinks more slowly.

The meter levels display the long term situation of the pawn, while the markers show you the immediate circumstances. Short-term events do not instantly lead to a mental breakdown or euphoric mood, but eventually they will. This is how you would expect the character to react psychologically if it was a real person.

The markers on the comfort and beauty bar are much less important, you will usually only look at them if you want to precisely examine how the current environment of the pawn impacts these needs. The food, rest and recreation bar do not even have markers: they are naturally falling towards zero, unless the pawn is eating, sleeping or relaxing – like fuel meters.