Colonies are the core of RimWorld. They are the central base of operations for all colonists, allowing them a safe place to sleep, grow food, stockpile resources, trade with outside parties, research new technologies, and defend themselves from attackers. Without a well-designed colony to support them, your colonists will be left to the mercy of hunger, disease, marauding raiders, and even worse threats.

For a complete how to guide, see Colony Building Guide.

In RimWorld, there are three types of colonies: underground bases, open ground colonies, and hybrid colonies.

For a complete how to guide on colony types, see Colony Building Guide.

Since Alpha 16, you can have up to 5 colonies running at the same time (available in Options > Settings). The larger you extend the more benefits and difficulties you will gain. There`s no need to make them all primary bases but keep just one as main and the others as resource specific locations, for example to gather components only. However you will be susceptible to have all your colonies raided simultaneously.

Besides that, another inconvenience will rise regarding foreign affairs, other faction`s visitors and traders will only enter one out of all your bases when your settlements are next to each other. The problem that this generates is that your sale stock may not all be in the arriving location as well as your fundings, making it difficult to buy. This is still possible to overcome by sending your colonists on an immediate caravan to better interact with the others. There is no "bank transfers" that can wire your money to a central bank deposit or towards branches.

Once all aimed resources have been depleted out of an area, abandoning them to create additional bases will leave ruins on the map. These ruins cannot be resettled or passed through. 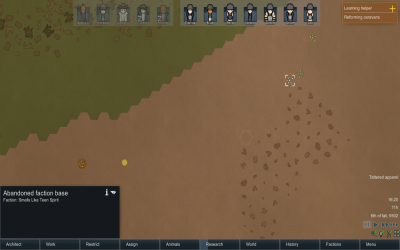 Abandoned bases will also obstruct an exit of new bases built next to them. 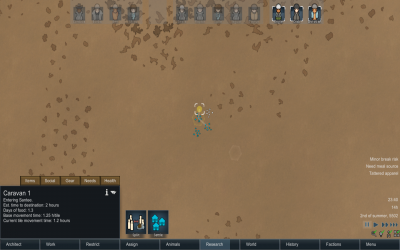