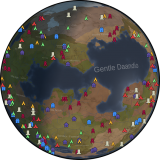 World generation - as the name would imply - are the worlds in RimWorld that are generated from either random or user-provided seeds that allow for a completely new experience every time. Each world is uniquely filled with multiple biomes that change what the world looks like and how it behaves. For example, some biomes feature a large amount of mountains, while others are full of grasslands.

There are sliders for overall planet temperature and overall rainfall, with the result of changing them being true to what would happen in real life. Time zones are also modelled as the world actually physically exists and is fully interactive. Temperatures in regards to proximity from the equator are also correct; with hotter biomes being more central and colder biomes being closer to the poles. The seasonal differences are also less pronounced near the equator, with there being a permanent summer in it.

When reloading the world after opening the colony, the game shows a loading screen.

When generating the world, the land masses form first, followed by rivers. An ancient society is then shallowly simulated to generate ancient roads, and modern settlements and roads are generated (often alongside ancient roads).

The world generation screen appears during the creation of a new colony.

SEED A random seed is provided, but you may enter your own. A given seed always produces the same geographical features such as land masses, rivers and mountains. The locations of human-built features such as roads and NPC faction towns may persist on multiple uses of the same seed, or they may vary somewhat from one use to the next.

GLOBE COVERAGE What percentage of the overall globe is generated. Larger globe coverage generates a fuller world, but takes a longer time to load up, and can also impact performance on lower-end systems.

Choose among wetter, drier, or normal range of biomes to generate across the planet.

Choose among cooler, hotter, or normal range of biomes to generate across the planet.

Choose desired density of faction sites to generate on the planet. This will largely affect your base's possible proximity to a number of faction bases and the time to reach them by caravan. This does not affect the frequency of friendly visits or enemy raids as that is instead affected by the chosen AI and difficulty.

Choose the desired numbers of each type of faction to spawn in the world, including outright disabling certain faction types by selecting zero of that type. The total faction count is limited to 11, with the Empire

Upon clicking Generate on the previous screen a new world is generated. The world will be made up mostly of hexagons and a few pentagons. Here the player can choose a tile to land on, or use the 'Select random site' button. Clicking a tile will show its information including its biome, terrain, overall weather, and growing period. For controls, see Controls

It's possible to choose an island to land on, however caravans cannot cross water tiles without installing mods. Reaching the mainland would require the use of transport pods in vanilla gameplay.

The 'Advanced' button accesses these options:

The 'Factions' button displays the different factions in the world.

There are three base kinds of factions in the base game: outlanders, tribes, and pirates and the Royalty DLC adds a fourth in the Empire faction.

Additionally there are the hidden ancients, insectoid, and mechanoid factions.

Normally, without faction amount customization, there are a total of 6 to 10 different factions, depending on the combination of DLC used: one neutral outlander nation, one hostile outlander union, one neutral tribe, one fierce tribe, one savage tribe, a band of pirates, the Empire

, and a cannibal pirate gang

. The colors on the factions and the shape of their bases screen help identify them on the world map. Also shown is each faction's relation with your colony and with each other. These relations can improve and decrease over time. Relations with the savage tribe and pirates can never improve and they will always raid your settlements.

You can never land or settle directly adjacent to a faction base.

There are several main features that affect game play in that tile on a generated world. These details are listed on-screen for the selected map tile.

There are nine biomes in RimWorld and—on a normally generated world—all of them are represented. They each correspond to specific features. Each biome is more likely to include certain features based on its real world equivalent.

A map tile's distance above sea level is its elevation. Higher elevation brings with it colder weather.

The coordinates of a map tile includes its latitude which affects its temperature range and amount of daylight. In polar latitudes the sun may not set or rise completely for a long time.

Each map tile has a certain amount of rainfall, given in average number of millimeters per year. It determines how often it will rain, not counting the automatic rain after a certain number of fire tiles are on the map.

Each map tile has one of the following terrain types: Flat, Small Hills, Large Hills, and Mountains. The terrain type determines the amount of mountain will be generated on the in-game map.

Each tile has its own averages for temperature based on the biome. Only the averages are presented in the world generation menu, but can directly affect your game. The effects of temperature vary greatly; extreme heat causes your colonists to develop heat stroke, while extreme cold may freeze them so thoroughly, their corpses will never decay. Temperature is related to the other three features of a tile in a generated world. Naturally, higher elevation and a more northern biome is colder.

The quadrums are the same across the planet, however the corresponding seasons are reversed between the northern hemisphere and the southern hemisphere, and it is permanent summer near the equator.

There are many roads throughout the world. They double the speed of any caravans using them, and factions tend to settle near roads. Visitors, caravans, traders or raiders are also tend to arrive and leave on a road.

They come in 5 types: path, dirt road, stone road, ancient asphalt road and ancient asphalt highway. They are functionally the same, with difference only being appearance when generated on a map.

Dirt roads use packed dirt, stone roads use flagstones of the local stone and ancient asphalt roads use broken asphalt. None of these can be disassembled for resources.

Sometimes other objects will generate alongside roads, for example the ancient concrete barrier or ancient lamppost alongside the ancient asphalt highway. These serve no function except cover or disassembly for steel.

There are rivers that flow towards the oceans and can merge with each other. They are more likely to generate in rainy areas.

When a map is generated in a tile with a river, there will be a belt of flowing river dividing the map. The river cannot be pumped dry using the moisture pump. In version 1.0, rivers can now be built over using bridges. There is also a watermill generator, added in Beta 19, which requires research before it can be built. Watermill generators must be built adjacent to moving water.

Caves are sometimes found in mountains and may contain harvestable mushrooms or dormant insectoid hives with a small group of insectoids. Dormant hives won't spawn additional hives or insectoids.

Hives can be a good source of food and/or a valuable trade commodity if you steal their jelly while the defenders are asleep. If an insectoid is asleep on a stack of jelly or other item, do not try to take it or you may awake them and put your colonist in peril. Colonists' default threat response may activate upon seeing insectoids, even if the insectoids are asleep. Be careful that your jelly harvesters are not set to "Attack" by default. If their default response is "Flee," you will need to manually prioritize them to haul the jelly. Otherwise it's possible for them to get stuck repeatedly trying to enter the cave, then fleeing, which could leave them too close to the cave when the insectoids wake up.

Take note of what time the insectoids on your map fall asleep each night and wake up in the morning. It may be helpful to create an allowed area which excludes the insectoid cave. You can switch your hauler to "Unrestricted" temporarily and have them manually prioritize collecting the jelly when you are certain the insectoids are asleep. Another method might be to wall in the entrance to the cave and forbid the door, only unforbidding it to send in your jelly harvester. This will prevent your hunters, plant cutters, animal tamers and haulers from wandering into the cave while the insectoids are awake.

The hive and its insectoids can be harmed without any colonist actions. Insectoids may suffer from extreme temperatures; cold snaps will kill the weaker ones. Insectoids will be aggressive towards humans, but mutually non-hostile with wildlife. A wild human counts as wildlife. Walls can be built which may guide raiders into the cave if the raiders spawn in the right locations. However, if the raiders destroy the hive, you will lose your supply of jelly.

Hungry predators may also try to hunt insectoids. Most of the time the predator will be killed, but may down some insectoids by wounding them. When the insectoids die, you can unforbid and collect the corpses for butchering, by the same method used to harvest insect jelly.

You may find Agarilux, Bryolux or Glowstool in these caves. Instead of needing light to grow, they die when exposed to excess sunlight.

Other factions appear as follows:

Faction settlements tend to be located near roads, and you cannot settle right next to one. If you choose a location within 4 tiles of another faction's settlement, the game warns you that this will decrease your relations.

Since Beta 18, factions are tied to the world seed so factions and their settlements are always generated in the same place. However, this no longer seems to be the case after 1.0.

Each major feature has a name generated with it. This includes biomes, lakes or oceans, mountain ranges, etc.

There are a total of 12 pentagons in the world, with the coordinates as such:

Besides being differently shaped to allow gap-free tiling of the whole world, they function no differently from regular world tiles.

The player can click 'Select random site' or select one of the squares in which to land and build a colony.