Prisoners are people who have been taken captive. This usually includes raiders, but colonists can be imprisoned too.

Prisoners are ordinary pawns under restraint. They have no Recreation or Outdoors need, but all other needs and most moodlets apply to them. This includes a need for food and the chance for mental breaks. They are confined to their cell, and will not do work. Prisoners retain their faction allegiance; imprisoned colonists who are released will immediately rejoin the colony, while other prisoners will try and leave the map.

Prisoners cannot open doors if not undergoing a prison break. While inside your colony, they will try to leave if there is an opening, such as a hole in the wall or a held open door, including if it is held open because of an item inside. A prisoner that can move will wear the most comfortable[Verify/Detail] clothing placed in their cell, and eat the food with the best mood buff that is available to them.[Detail] Mobile prisoners can use a nutrient paste dispenser that faces into their prison. Otherwise, wardens will bring any food allowed by their food restrictions. A prisoner's medical settings, as well as defaults for all prisoners, can be adjusted in their Health tab.

They are otherwise the same as regular prisoners, including the ability to become a slave

Unwavering loyalty can be disabled in the storyteller settings.

Prisoners can be loaded into a caravan. If they can walk, they can carry 35 kg worth of items, like your colonists. When inside a caravan, the prisoner will never try and escape unless its part of a mental break.

If the caravan enters a loaded map (such as an ambush), the prisoner will wander around idily, and may walk into the crossfire. Enemies will also target prisoners if their factions are enemies.

In order to capture any prisoner, you need a valid prison, which is enclosed and has an open bed or sleeping spot (See #Prisons below).

The gameplay steps required to capture a pawn depends on their state:

If you attempt to capture a pawn from a neutral or allied faction, the faction will immediately turn hostile. This includes transport pod crashes, if they happen to be part of an existing faction.

If you need to capture a pawn, then sleeping spots can be used to instantly create a prison and bed space anywhere indoors. You can also turn a colonist bedroom into a prison. 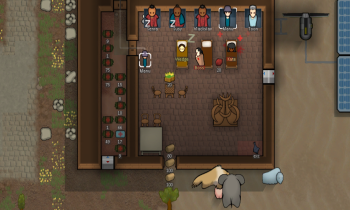 Megasloth getting sheared at the exit of a prison door, holding it open for a prisoner to escape.

Prisons are required to hold prisoners.

A prison must be desiginated in a fully enclosed room, closed off with walls and other impassable objects like doors, coolers and nutrient paste dispensers. Prisoners cannot be captured unless the prison is enclosed, and mobile prisoners will walk out of the map if an opening exists.

In order to actually form a prison, at least 1 bed or sleeping spot must be placed. Selecting the bed allows you to set "For Prisoners". Colonists and slaves

may not share the same room as a prisoner; when 1 bed is set to prisoners, all beds will be converted to prison beds. The beds will turn orange to signify this, and the whole room gains an orange outline when selected. In order to actually capture a prisoner, there must be an open sleeping area for them to stay.

A prison is called a prison cell if there is 1 bed available, or a prison barracks if there are multiple beds. A prison is otherwise treated as a bed room or barracks, including mood impacts for its Impressiveness.

Prisoners can only use items that are in their cell. Food, beds, and nutrient paste dispensers placed inside a prison are reserved for prisoner use. While a colonist can be ordered to eat food placed in a prison cell, they will not automatically do so. Colonists on the food binge mental break, as well as animals, will ignore a prison for this purpose.

Unless you want your prisoners to die, make sure that it is hospitable. Regulate the temperature, or give prisoners sufficiently insulating clothing, such as tribalwear. Make sure that food gets to a prisoner (either via a storage zone, warden delivery, or nutrient paste dispenser). Otherwise, see #Mood regulation for how to make your prison better for the inmates... or worse.

Players can assign wardens to do the following tasks:

The following options are added by DLC:

Prisoners start with resistance, or unwillingness to join the colony. This must be lowered to 0 for recruitment attempts to begin. Unwaveringly loyal prisoners do not have a resistance stat, and can't be recruited.

Under the Recruit or Reduce Resistance orders, wardens will attempt to lower the resistance. How much is reduced depends on a prisoner's mood, the warden's Negotiation Ability, and the prisoner's opinion of the warden. Wardens with more Social skill have a greater Negotiation Ability. There is a delay between each conversation.

Once resistance hits 0, wardens will try to convince the prisoner to join the colony, with a chance to succeed, depending on each prisoner's recruitment difficulty percentage, their current mood, faction, how many colonists you currently have, as well as your storyteller. If the prisoner is assigned to Reduce Resistance, then wardens will continue to converse without actually recruiting.

For exact mechanics and chances of recuitment, see #Recruitment.

work analagously to Recruit and Reduce Resistance, except that the end result is that the prisoner becomes a slave

. A prisoner starts with much less will than they do resistance.

A wild man can be captured. They must be tamed, under the usual animal mechanics, rather than being recruited as a prisoner. Once tamed, they will join the colony as a colonist.

Wardens will take the prisoner outside your colony, and free the prisoner. "Outside the colony" means beyond your outermost line of connected walls, so it could be just out the door, or across most of the map if your defenses stretch that far.

Releasing a prisoner of another faction will give a goodwill boost of +12. In order to count towards goodwill, the prisoner must successfully leave the map healthy, with any wounds tended to. Prisoners that can't walk can't be released. Pirates and savage tribes do not interact with goodwill, so releasing them has no effect.

Releasing a colonist will have them rejoin your colony. Slaves retain their home faction.

Wardens will cut a prisoner's neck immediately, killing them without fail. This is a different action from the Prisoner execution ritual.

Executing guilty prisoners - those who have harmed the colony in 24 hours - give a −2 moodlet to non-Psychopath colonists. Executing a non-guilty prisoner increases the penalty to −5.

Attemps to convert the prisoner to the warden's own ideoligion. The target ideoligion can be selected, which will only allow wardens of that ideoligion to convert.

This is functionally the same as regular conversion that can occur randomly between colonists, except that it is done on a regular basis.

Pawns with the Bloodfeeder gene will automatically drink the blood from a prisoner, directly. This happens when a bloodfeeder is below their desired Hemogen and if the bloodfeeding would not kill the prisoner.

In addition to prisoners being able to leave if there's an opening, prisoners have a small chance to actively break out and escape. This is affected by the following factors:

During a prison break, prisoners are able to open all doors. They will attempt to equip and use weapons and weapon-like utility items such as orbital bombardment targeter. All prisoners in that cell or barracks are affected. Prisoners from different cells may also join in, or choose not to do so.[Detail]

To fight escaping prisoners with less risk of killing them, use low damage weapons, unarmed combat, or melee with ranged weapons. Place your exits away from the map edge and keep as few doors as you need. Store weapons away from your prisoners, and watch out for downed fighters dropping their own weapons. Alternatively, brain implants that cause brain shock

can be implanted in long term or particularly unruly prisoners, and EMP weapons used to down them instantly and safely.

Each prisoner has their own recruitment difficulty:

Finally, the resistance is multiplied by a random factor between 0.8 and 1.2.

A warden will reduce a base of 1.0 resistance per conversation. This is multiplied by:

Prisoner's opinion of the warden:

The Word of Trust psycast

will reduce resistance by 20, multiplied directly by the prisoner's Psychic Sensitivity and no other factors.

Increasing mood makes prisoners easier to recruit, and less likely to go berserk. If you want to increase prisoner mood, you can do the following:

If you want to change the target's ideoligion

, then instead try and make the prisoner upset. Lower mood reduces certainty gain, and may cause a Crisis of Belief extreme mental break, which reduces certainty by 50%. The following can help with decreasing mood:

Keep in mind that crises of belief that would drop a pawn's certainty to or below 0%, will instead convert the pawn to a weighted randomly selected ideoligion with a new certainty. While this process might select the intended ideoligion, it may not while also requiring their certainty be reduced again. If a pawn's certainty is below 50%, consider improving their mood above their extreme mental break threshold to prevent this.

Whenever they are berserk, under a prison break, or just escaping, sometimes you will need to subdue a prisoner. When berserk, prisoners will fight other prisoners, then will punch the weakest area (usually a door) to escape. When under a prisoner break, they can just open the door.

If you need to keep the prisoner alive, it is best to use melee - either with a blunt weapon, or just bashing with a gun. Several unskilled pawns work better than 1 skilled one. For berserkers, you can have a skilled Construction pawn constantly repair the door. This trains Construction, but is labor intensive.

If free roaming animals are within the prison, then berserking prisoners will prioritize them over breaking out. You can place animal sleeping spots inside the prison for an automatic form of prisoner supression. Note that animals are slightly more dangerous than humans. In addition, most animals will create a large amount of filth, quickly lowering the room's quality. You may want to use straw matting.

Enemies who have fallen in battle may not always be worth capturing in the first place. For example, a hostile with a shattered spine will require a bionic spine to replace, which may not be worth it. Unwavering prisoners simply can't be recruited normally, so fall under the same boat.

There are several ways to dispose of these prisoners: