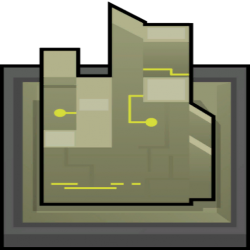 A large archotech structure. The dull green surface is utterly pristine and undamaged, and so smooth that it's slippery. There is no way to guess how long it has been here, and its purpose seems unfathomable. The psychic power it emanates isn't aggressive, but it is overwhelming and inhuman. Like standing inside a threshing machine of whirling blades, inside the heartbeat of a sleeping giant, inside a tight tunnel and you can't move or speak or breathe... Anyone who goes near it will become unsettled unless they are psychically deaf.

Major archotech structure is a structure added by the Ideology DLC. It acts as an intermittent towards the endquest The Archonexus.

The structure is designed as an ancient, yet pristine building from eons ago. Every 6,000 ticks (1.67 mins) it emits a pulse that damages and kills any plants (Excluding Anima trees) by 10 HP within 32 tile radius. It also frequently spawns anima grass (up to 35) in its place (highest chance at 24 tiles) which is unfazed by the pulses.

A Major Archotech Structure is always surrounded by 4 Archotech towers (6 at the third map) at the start of the new map. It is invulnerable to any form of attack and cannot be destroyed by any means, and functions as a requirement for the player to advance through the said quest by sending a pawn to study it (2,100 progress is needed)

Colonists standing nearby that are not psychically deaf will be affected by a base -5 "Archotech Emanation" mood debuff as long as they stand close to it. Psychic sensitivity affects the magnitude of the debuff. The area affected is an octagon 27 tiles plus one extra tile in each cardinal direction.

If a colonist is standing within 2 tiles of the structure, they will get a base -10 mood debuff instead. This debuff shares the same "Archotech Emanation" name as the lesser -5 debuff, but the description of the debuff will change to read "These thoughts coming from the structure, they open doors to such vastness... I feel so small that I might disappear." This debuff, other than the different description and greater penalty, functions identically to the lesser debuff.

Contrary to the description, it does not harm creatures that stands near it.