An antimatter-powered antigrain warhead connected to a trigger which detonates on touch or bullet impact. Since it is hidden in the surrounding terrain, it cannot be placed adjacent to other traps. Animals can sense these when calm.

The IED antigrain warhead trap is Security building that explodes when stepped on, detonating in a massive explosion powerful enough to instantly kill all enemies in-game except for the Thrumbo, Centipede, and shield belt-wearing enemies.

IED antigrain warhead traps can be constructed once the IEDs project has been researched. Each trap requires

When triggered, the IED will spark and emit a hissing sound shortly before exploding a 15 ticks (0.25 secs) later, dealing "Bomb Super" damage in a 15 tile radius of itself, dealing 550 damage at the center and 110 damage at the extreme edge of the radius and linearly interpolated in between, and setting fires to roughly 22% of the affected tiles. Nearby non-drafted pawns, colonist and NPC alike, will attempt to clear the blast radius once the spark starts however the short wick time and large radius make success unlikely.

Additionally, when damaged to below 20% of the maximum HP or[Fact Check] when hit be a projectile dealing the Bullet, Arrow, or ArrowHighVelocity damage type, the same triggering process will begin. 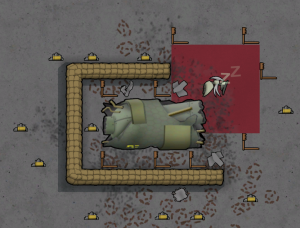 Radius of where buildings will wake mechs is highlighted in red.

Regular antigrain warheads have a radius of 14.9 tiles - as a mortar has a base miss radius of 9 tiles, a launched warhead can hit the intended tile and every tile within a 5-tile radius with the force stronger than a doomsday rocket launcher at 100% certainty. This makes antigrain traps more niche than regular IED traps.

Antigrain traps have the advantage of being placed in a precise location. Bulkier mechs like centipedes are able to survive the edge of an antigrain shell. The trap can provide a more precise, i.e., a more powerful blast against these targets.

If the Classic Mortars storyteller setting is turned on, the mortar miss radius is increased to 12 tiles, reducing the launched shell's effectiveness. This makes the IED a more lucrative option.