The severity of a mental break depends on how far below their threshold they are:

Once a colonist's mental break ends, they'll usually get the 'catharsis' thought, granting a +40 mood for the next 2.5 days. This will generally prevent a colonist from entering a spiral of mental breakdowns in all but the worst scenarios. Colonists with the Tortured Artist trait will also have a chance to receive an inspiration after a mental break ends.

While a colonist is experiencing a mental break, you have no direct control over them, but you can draft another colonist to attempt to arrest said colonist. The broken colonist has a chance based on the arresting pawn's stats to either go berserk, or come quietly and be escorted to the nearest available prison bed - immediately ending their mental breakdown. However, this will cause the loss of his/her colony membership status, removing the pawn from your colonist bar. Releasing them will return them back to the colony, but eliminates the catharsis bonus, instead yielding a 'was imprisoned' negative thought that can lead to further mental breaks.

Another more extreme way of ending a mental break is beating the colonist with blunt trauma until they are incapacitated by pain. This is the only way to stop a berserk colonist. However, this causes the victim to have a negative opinion of the one(s) who beat him up, and you risk killing the colonist if he is already injured. It is ineffective if the colonist feels reduced pain, like those with the Painstopper implant or high on Go-juice. This also does not grant the Catharsis mood buff unless the colonist is going berserk. 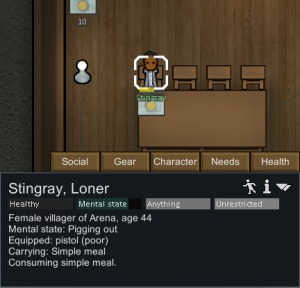 If a colonist is stressed, they may decide to pig out on whatever meals they can get their hands on.

A binge will end as soon as the affected colonist gets back to bed, or after a certain amount of time has passed. 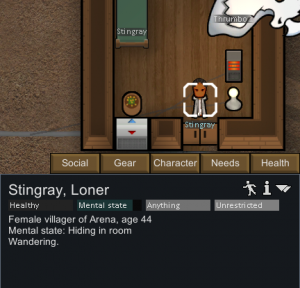 Colonists who hide in their room will wander about in their room, refusing to come out and refusing to satisfy their needs. This event is relatively short, and usually does not put the colonist in harms way. The worst that one can come off with from this sort of mental break is mild starvation and possibly exhaustion.

The colonist becomes resentful and starts to insult others around, making moods worse for everyone.

Insults can lead to a social fight, which would then lead to the end of the break.

The colonist starts to hate one person in particular, and will proceed to bombard that person with insults. This can totally ruin the victim's mood with an up to -33 mood penalty through 10 stacked insults, and can potentially trigger another mental break. 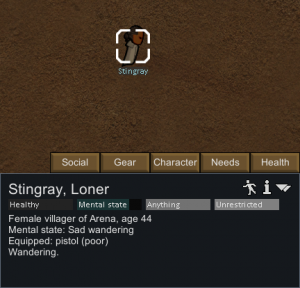 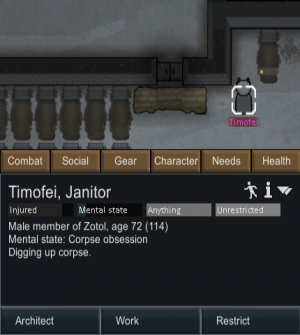 Colonists with a corpse obsession will go to a grave or sarcophagus, dig up a corpse and drop it on a high-traffic spot, such as a table in a dining room. The obsession will then proceed to end.

This break can only occur if you have a filled grave or sarcophagus.

While this break is somewhat quick, it can potentially bring mood debuffs to whoever sees the corpse, and also a heavy -10 debuff due to leaving a colonist unburied. 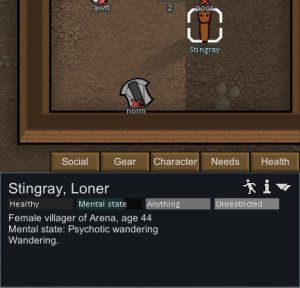 Colonists who become dazed will wander around and will eventually recover on their own. Dazed colonists can also be arrested, which can be useful if they are in imminent danger.

The colonist becomes sadistic and takes pleasure in hurting your prisoners until they are downed from pain. 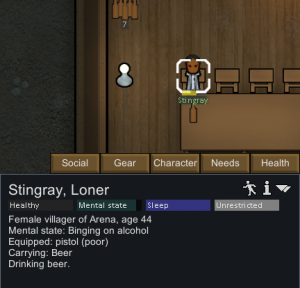 If a colonist gets very stressed, they may drink or smoke their problems away by binging on social drugs (i.e. beer, smokeleaf joints. This can only happen if you have social drugs present in your colony.

Social drug binges will also occasionally happen for those with the chemical interest trait regardless of mood, and still gain the catharsis thought afterwards.

A stressed colonist decides to vent his anger out on the structures in the colony, randomly punching at them.

The colonist hides in his bedroom and wreaks havoc on the furniture inside.

Targeted tantrums are especially dangerous when the pawns tries to destroy a stack of mortar shells, which is a certain death for the broken pawn and great danger for any pawn nearby those shells. 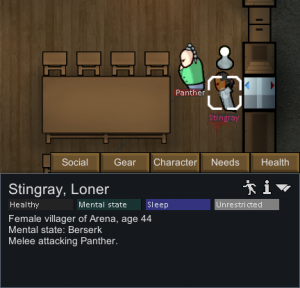 When a colonist goes berserk, they become a danger to themselves and anyone nearby. They may use doors that are locked/forbidden. Berserkers don't close doors behind them, auto-doors included. Doors they open will remain open until another pawn passes through. They will melee attack the nearest living creature until their target is either subdued or killed. Due to the risk of death or permanent injury for both the psychotic colonist and any that happen to be nearby, a psychotic colonist is a very real threat. If the berserk colonist poses or is in direct danger, a colonist with bare fists or a blunt weapon works best to quickly subdue them with the least risk of killing them. Once a berserk colonist is subdued they do not need to be arrested, rather they can and should be rescued to recover from their injuries.

If the berserker is not in danger and can be safely avoided, it's best to leave them to rampage by themselves until their berserk rage wears off to avoid injuries and the associated pain mood debuff.

When colonists enters a catatonic break, they become incapacitated and need to be rescued.

This is one of the least harmful of the extreme breaks as it does not result in injury or damage to both the colonist and others. However, since the affected colonist will be down for quite a long time, you will need to find a way around that. This is especially if the colonist performs a vital task in the colony.

Since catatonia is technically a health condition, usage of the healer mech serum can instantly bring the affected colonist out of the mental break.

Given up and leaving

A colonist decide they've had enough with the colony, and leaves entirely.

This can be countered either by arresting the said colonist, or incapacitating them by force. 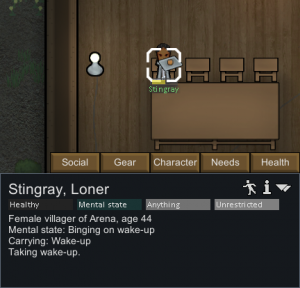 Colonists on a hard binge will binge on hard drugs (i.e. flake, yayo), go-juice and wake-up). Hard drug binges are considerably more dangerous for the affected colonist's health than soft drug binges, as hard drugs contribute towards overdoses which are potentially lethal, and can easily lead to an addiction. As with soft binges, hard binges will either end when the affected colonist goes back to bed, or after a certain amount of time has passed. Colonists taking penoxycyline and luciferium have nothing to do with the drug binge they are on.

Colonists with the chemical fascination trait will occasionally have a hard drug binge regardless of mood, and still gain the catharsis mood afterwards (if they don't die from an overdose). 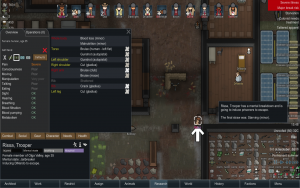 A colonist has a mental break down and is going to induce prisoners to escape. When the colonist reaches a prisoner, a prison break event will be triggered. Afterwards, the mental break will be changed to something else.

The pawn can be stopped before reaching the cell. 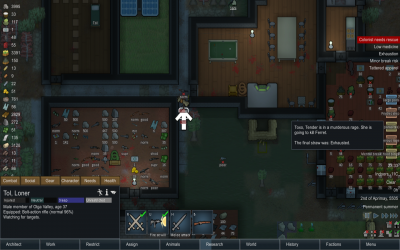 A colonist becomes maddened, and will attack a randomly chosen colonist or prisoner with melee until they are dead. Once the target is killed the pawn exits its rage.

This requires intervention from other colonists if the life of the victim is to be saved.

The colonist runs into the wild and starts to act like an animal. While acting like an animal, the colonist will subsist on wild sources of food, usually berry bushes or agave in arid biomes. They may wander across spike traps and randomly trigger them.

Unlike other breaks, this one lasts indefinitely without intervention. The only way to end it is to have a colonist tame the broken colonist and convince them to act like a human again. Taming a wild man is equivalent to taming an animal of 87.5% wildness (between a polar bear and a rhinoceros), except there's no minimum required handling skill to tame a wild man.

Damaging them until they are downed isn't a viable option; since they don't belong to your faction anymore, they will most likely die upon receiving enough damage to incapacitate.

A colonist becomes maddened, and will start to slaughter animals at random. If you have a lot of tamed animals this usually won't cause major losses, but there's a chance the maddened colonist may decide to butcher a bonded animal or your favorite tamed thrumbo.

These mental states aren't mood-related, and have certain circumstances required to trigger them. 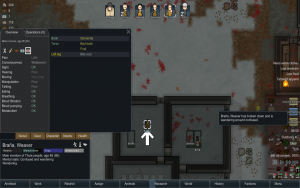 Similar to the 'Sad Wandering' mental state, except confused wandering only occurs on a pawn with Alzheimer's or Dementia, as well as those still woozy or recovering from anesthesia.

This mental state bears a similarity to psychotic wandering in the respect that confused pawns are prone to wandering into dangerous situations, they do not strip off their equipment. This mental state ends after a certain period of time, or when the affected pawn is downed or killed. All normal thoughts are blocked during this time frame. 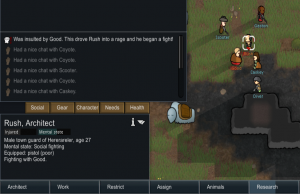 Social fighting is triggered when one pawn slights, insults another (significantly more likely with insulting than slighting), and the affected pawn gets angered. While very brief and usually only resulting in minor-moderate injury, social fighting can also end up with much worse results including a pawn getting downed, disfigured, or uncommonly even outright killed. Social fighting ends after a very short time, or when one of the fighting pawns gets downed or killed.

This sort of mental break happens when half (rounded up) of a group of non-colonist humanlikes are killed; whether it be hostiles, traders, or the likes. Pawns affected by this mental state will attempt to leave the map by any means possible as soon as they realize that they're not going to win whatever battle they got caught up in.

This mental state will end once the affected pawn leaves the map, or when they're killed.

Pawns in this state will run indiscriminately towards the closest edge of the map, completely disregarding any hostiles in the way (such as your colonists firing at them).

Animals may suffer a manhunter mental break, similar to berserk. A manhunter animal will seek out and attack any humans on the map it can reach. The mental break can be triggered by the death of their bonded master (only applies to tamed animals), via a random event (mad animal or psychic wave), being injured by any humanlike pawn or a failed taming attempt angering the animal. A player should take care about what animals they hunt, because although some species rarely turn manhunter, others have no tolerance. If one animal in a herd is angered, the entire herd may turn manhunter. Manhunter animals will attempt to break down doors if they see a colonist hide behind them, so they are not completely safe against them.

An animal's manhunting rampage will end after a certain amount of time, or once forcibly subdued.

Permanent manhunter is randomly applied to animals that are part of a manhunter pack. Affected animals will never snap out of this mental state under normal circumstances, and completely neglect their own needs. Animals in this state will generally leave the area within a few days.